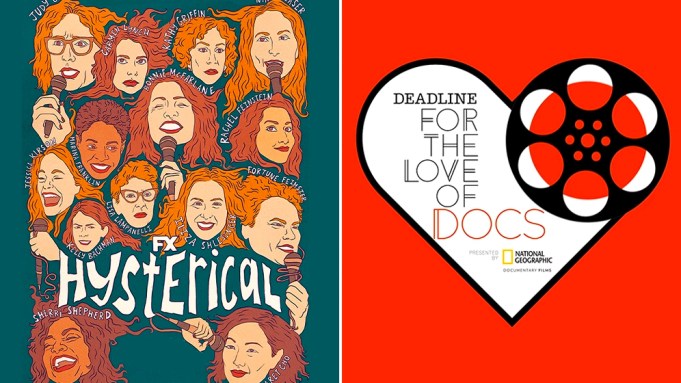 Telling jokes in front of an audience and getting laughs is one of the most challenging things imaginable. For women comedians it’s even a bigger challenge—not only do they have to be funny, they’ve got to deal with cultural stereotypes that for the longest time have cast women as somehow not humorous.

“You can sense this feeling in the audience, like, ‘It’s a woman. She’s not going to be funny,’” noted standup comic Jessica Kirson, producer of the documentary Hysterical, about the experience of women in comedy. “You really have to prove yourself the second you get on stage. You have to just show them that you’re going to be funny.”

Andrea Blaugrund Nevins directed the FX Network film, which played as part of Deadline’s For The Love of Docs series. It’s Nevins’ followup to her 2018 documentary Tiny Shoulders: Rethinking Barbie, which examined evolving attitudes toward women in America through the lens of Mattel’s iconic doll.

“I felt like I wanted to continue in that space and start looking forward and there is no group of people who are pushing the outer limits of society more than comedians,” Nevins explained during a Q&A after the screening. “And so, of course, female comedians were the people I most wanted to spend time with.”

Nevins filmed comedy sets and interviews with an array of performers, including Kirson, Margaret Cho, Fortune Feimster, Nikki Glaser, Rachel Feinstein, Marina Franklin, Sherri Shepherd, Iliza Schlesinger, Judy Gold and many others. The female comics still run up against barriers, despite progress made by the women’s movement.

“It’s really striking how much cultural norms and gender roles—as much as we’ve talked about them and as much as we have thought that we have changed them—are still very sticky,” Nevins said. “It takes a long time… Anybody at all who’s in a role in which they’ve been oppressed can see quite clearly that the oppression continues. It’s still there. Those biases are still there. They’re very, very hard to erase.”

“I think it is about that we should just be ladylike, be quiet, not speak our minds, shut up,” Kirson observed. “Our place is not on the stage. We should be home taking care of men. It’s very old school. I think it’s changing a little. We have a long way to go, unfortunately.”

Kirson said for pioneering funny women of earlier generations, like Joan Rivers, Phyllis Diller, Totie Fields and Moms Mabley, it was even harder to make it in comedy.

“I don’t know how they did it,” Kirson said. “Those women are warriors. It’s incredible what they did, in that time to go out and do standup and be around those men who so many of them had such issues with women and who were so afraid of women. These men are so afraid of our power—that’s really, in my opinion, what it’s about.”

Nevins began making Hysterical before Covid hit. She had to find a way to complete it in the midst of the pandemic, including filming additional interviews with her subjects.

“I kind of became a camera person, sound person,” Nevins said. “We did [interviews] however we could—in people’s closets, in their kitchens, with their iPhones, with their computers. It was catch as catch can.”

There was an unexpected upside to filming with a scaled back team.

“The other thing that was a takeaway for me and I hope it will be a takeaway for the audience is it allowed each of these women, many of them, to be a little more vulnerable, because there wasn’t a whole crew behind me,” the director noted. “There was really a one-on-one conversation, so in some ways I felt like we got even deeper than we might have otherwise.”

For more insights from the filmmakers, watch the video above. For The Love of Docs is sponsored by National Geographic.