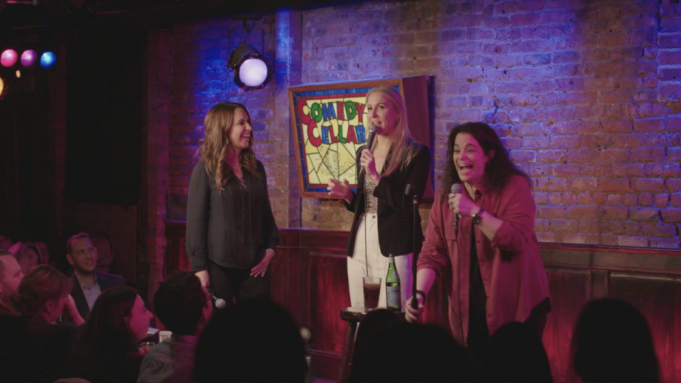 That was back in the day. But sexism still stands in the way of female standups achieving equal standing with their male counterparts, a subject explored in the documentary Hysterical, premiering at the SXSW Film Festival.

“Absolutely, it is an incredibly tough thing to do whether you are a man or a woman and then you add on being a woman, it makes it a lot harder,” Kirson, an executive producer of the film, observed during a panel discussion on Hysterical in the Deadline SXSW Virtual Studio. “We go through a lot more hoops to get where we are. I really look at female comics who’ve done what they’ve done—Sherri, Margaret—they’re warriors. You have to be a warrior to make it this far in this business.”

The film reveals how difficult it is for women just to get time in front of audiences in comedy venues, where club owners favor men.

“I’ve been on stages where I look at the set list and I go, ‘Hmm. I’m the only one out of 12. I’m the only woman,’” Shepherd noted. “I have been in comedy clubs where I have tried to get other women on the stages. But they’ll take men. I’ll look up and I’ll see men who are not funny and I go, ‘How did this happen?’…People do want to hear our voices. But we’re fighting against this establishment that somehow [doesn’t] feel the same way.”

Hysterical explores how the #MeToo movement has helped foster a feeling of solidarity among women comics.

“We’ve definitely come together a lot more since the whole movement started, exchanged stories. I didn’t even realize things were inappropriate until I started talking to some of my friends. I’m like, ‘Ohmygod, that guy used to slap me in the ass—I’m so used to it that I didn’t even realize,’ which is really sad,” Kirson commented. “It’s the start and it’s the beginning and it’s going in the right direction.”

“The myth of male genius is our abuser and we’ve been isolated in our own thoughts, gaslit by this myth for all the time we’ve been doing comedy,” Cho said. “It’s very hard to break away from it. Until #MeToo and #TimesUp, we didn’t have some kind of witness to some of the things we went through and suddenly we realized we’ve all been experiencing it.”

Following SXSW, Hysterical debuts on the FX Network on April 2 and on the Hulu streaming platform April 3. Above all, it’s a very funny film which features female comedians doing routines that demonstrate, in case anyone was still wondering, that women have every bit as much capacity as men to be funny, if given the opportunity. The documentary may help dismantle remaining barriers.

Nevins, the film’s director, noted, “I get teary when I hear them talk because what they have to go through is really a mirror image of what we have to go through, all of us women, but they have to do it entirely alone. When they get up on stage there isn’t anybody supporting them except themselves. So I find that bravery to be admirable and something that I aspire to.”