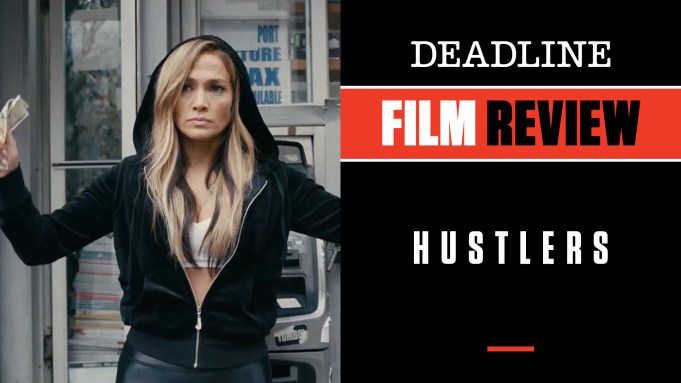 All hail JLo, who manages to bring Hustlers up a few notches and marks a career best as her sheer force of personality and savvy, as well as often unfairly underrated acting ability that could put her in a pole (sorry) position this awards season. Reaction from the Toronto International Film Festival debut this week was through the roof, though I only caught up with it Wednesday evening in L.A. Beware of film festival love, though, as those events to be a little over the top in embracing a movie, but the hype for Jennifer Lopez undoubtedly is real, and the movie itself, while no masterpiece, is an entertaining enough romp with a clever premise ideal for these times when women are finally getting their chance for revenge against a male-dominated society.

But getting back to that “pole position.” If ever there was a memorable way to enter a movie, it is that very early scene where Ramona (Lopez), a world-weary pro stripper who has seen it all and knows how to play the game, slithers on the stage doing a pole routine that would have won a gold medal had she been on the Olympic gymnastics team. To say it is dazzling is an understatement, perhaps a reason the critics (77% white males, statistics still say) have gone wild. Fortunately it is just a beginning for Lopez’s sly and knowing portrayal of the ringleader of a group of strip club performers who decide to turn the tables on their male clientele.

Essentially this film — written and directed by a woman, Lorene Scafaria, with Lopez among its producers — is Robin Hood with strippers. Smartly set in 2008 at the time of a stock market crash, Wall Street greed and bad behavior at its height, Ramona and her gang hatch a plan to go after the top echelon of their customers, drug them and wait for them to pass out before grabbing their credit card and maxing it out before they know what hit them. Pretty soon anyone in a suit and tie is a target. It is the Robin Hood formula of taking from the rich and giving to the poor, in this case working women forced by circumstance to exploit themselves for the pleasure of the male gender. What do they do with all this newfound wealth? Well, they go shopping. Mother Teresa they are not.

It is all based on a 2015 New York magazine article by Jessica Pressler, played in the movie under a different name by Julia Stiles. Pressler wrote the story of a group of strip club employees who actually pulled off a scam like this at Scores, the NYC club where they worked, and were charged as criminals once the jig was up. An opening graphic says, “Inspired by a true story,” so just how close to the truth it stays is up for discussion. But Scafaria has taken a surefire crowd-pleasing premise, set it in the sleaziest of environs and gone to town with it.

At times the film tends to leave a bitter taste in some ways because these men who are targeted are not criminals by definition, but really just poor schlubs paying for the rage against Wall Street and the very rich who lack an ounce of compassion. That they aren’t necessarily evil makes it a little queasy to watch at times, particularly when one appears to have died. That it works as well as it does is a tribute to some smart scripting by Scafaria and splendid acting all around, particularly Lopez who steals it lock, stock and barrel. Actually her character is really supporting in the storyline to Constance Wu’s Destiny, a wide-eyed newcomer to the scene who Ramona takes under her wing (watch a clip of JLo’s Ramona teaching Destiny how to work the pole). Her payback to her grandmother gets a little corny as does some of the domestic stuff trumped up here for maximum audience sympathy, but Wu is too good a performer to let us down.

The rest of the key gang is fun to watch, particularly rappers Cardi B and Lizzo in cameos, Keke Palmer and Riverdale’s Lili Reinhart. The male roles are strictly one-dimensional, sweet revenge of its own for Hollywood’s long history of having it the other way.

The moral message of this film is questionable, to be sure, but watching it play out now in the Donald Trump era you just can’t help root for these women to succeed in their scam. Some of it goes way over the top, though, particularly a dumb sequence where one of the drugged men jumps off the roof naked and causes chaos among the panicked women who rush him to hospital in such unsubtle slapstick fashion that it makes Weekend at Bernie’s look like serious drama by comparison. Fortunately most of the script is smarter than that, sometimes wickedly amusing, so the film can afford some missteps.

At its core Hustlers is a movie that ought to resonate with both the haves and the have-nots. As for Lopez, she’s never been better. Producers in addition to Lopez are her partner Elaine Goldsmith-Thomas and longtime manager Benny Medina, plus Jessica Elbaum, Will Ferrell and Adam McKay. STXfilms which took it over after Annapurna dropped it (Megan Ellison has EP credit), opens it Friday. Check out my video review of the movie at the link above with scenes from the film.

Do you plan to see Hustlers? Let us know what you think.