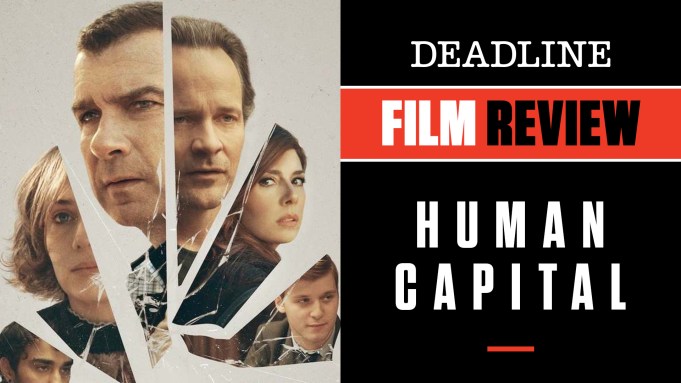 Well, it’s certainly no Crash. But that 2004 Oscar-winning Best Picture has a cult of haters it has collected in ensuing years, so hearing the new film Human Capital is not quite up to snuff with that Paul Haggis movie might make them actually think better of it. I liked Crash with its multi-story structure and starry ensemble seeming a fresh take at the time, even though Alejandro González Iñárritu had beaten it to the punch in 2000 with his Oscar-nominated foreign-language film Amores Perros. Both are fine examples of this sub-genre, which was imitated quite a bit after their success but not so much in recent years.

Now director Marc Meyers and prolific screenwriter Oren Moverman aim to change that with Human Capital, which premiered at the Toronto Film Festival and is now on VOD after its simultaneous theatrical release was scrapped thanks to the coronavirus shutdown. The film employs the same idea of a group of people all inter-connected somehow with a tragic accident as each of their stories is told. Actually, this method of storytelling is an age-old device best used in my opinion in Joseph L. Mankewicz’s wonderfully sophisticated and entertaining 1949 Oscar-winning A Letter to Three Wives, but I digress.

Set in upstate New York and based on Stephen Amidon’s 2004 novel (coincidentally coming out the same year as Crash) and then made into a 2013 film from Italian director Paolo Virzi, Human Capital starts with the “accident,” a hit-and-run crash in which a mysterious black SUV sideswipes and causes grave injury to a young father riding a bicycle. It then splits into three different parts, almost separate short films, with characters tied together by returning in Groundhog Day-style fashion to the same awards banquet and one particular table of guests we later learn have a connection with events at the beginning of the film.

The first part centers on Drew Hagel (Liev Schreiber), a businessman hitting tough times who meets Quint Manning (Peter Sarsgaard), a wealthy hedge fund guy who is the father of Jamie (Fred Hechinger), the high school boyfriend of Drew’s daughter Shannon (Maya Hawke). When dropping his daughter off at their house, a need for a tennis partner for Quint leads to a business deal and a pack of lies on Drew’s part in order to get in on the hedge fund. The second part is all about Carrie (Marisa Tomei), Quint’s bored trophy wife, and her attempt to renovate and purchase a large art deco theater complex, and in the midst of embarking on an affair. The third — and best — part revolves around Shannon and a dangerous new boyfriend named Ian (Alex Wolff), who deals drugs at school (Shannon dumps Jamie when she suspects he’s really gay). Ian is in therapy with Shannon’s stepmother Ronnie (Get Out’s Betty Gabriel), who as it turns out is having twins, thereby making Drew’s financial adventure even more pressing.

And like any good mystery the big question becomes just who was it behind the wheel of that SUV?

The sterling cast is the main drawing card here and all acquit themselves nicely, but acting honors belong to Hawke, who manages to take it to another level and lifts the story beyond melodramatic tendencies as she hits the depths of a millennial caught up in events out of her control. Producers are Moverman, Bert Marcus, Trudie Styler, Celine Rattray and Matthew Stillman. I counted about 24 others with executive producer credits as well as about another 10 who have co-producer, associate producer or coordinating producer credits. It takes a village to make an indie, apparently. Vertical Entertainment has U.S. all media, Universal has non-U.S. all media.

Check out my video review above with scenes from the film. Do you plan to see Human Capital? Let us know what you think.