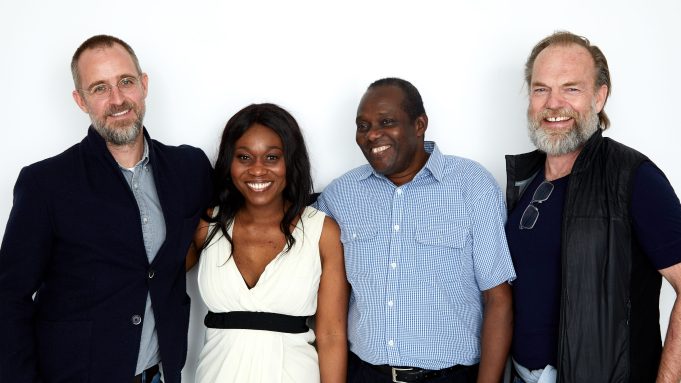 Documentary director Ben Lawrence came to TIFF with his feature debut, in which an Australian photojournalist (Hugo Weaving) and a South Sudanese refugee (Andrew Luri) are forced to confront the horrors of war together. The story had been with Lawrence for a long time, he said—since 2002, in fact, when the director was working on a campaign for Amnesty International and coming into contact with many recently arrived refugees in Australia.

“This story is set in Sydney,” Lawrence explained during a visit to the Deadline studio. “It’s about a contemporary war photographer who returns home. He’s approached by a man who he’d photographed 20 years earlier, and the film becomes about their relationship. Central to that is the photograph that he’d taken of him, and the mystery surrounding that photograph. That [mystery] unravels, and the story spreads out into the families and the partners of the two men as well.”

Actor Weaving had no qualms about jumping on board. “Ben sent me the script,” he recalled, “and a beautiful accompanying letter, and a book of his photographs—he’s a wonderful photographer himself. I read the script [and] really, really loved it. I found all the characters very complex, and the underlying issues that are brought up in the piece—to do with trauma, home and family—really compelling. So we met and I said yes.”

The film proved to strike an equally emotional chord with with audiences at TIFF. “Some people are getting very, very moved by it,” said Weaving, “and it’s great. We had a wonderful standing ovation at the screening the other day. It was phenomenal, it just went on for ages.”

To hear more from the Hearts and Bones team, click on the video.