Continue to Deadline SKIP AD
You will be redirected back to your article in seconds
Skip to main content
June 12, 2020 2:36pm
3Comments 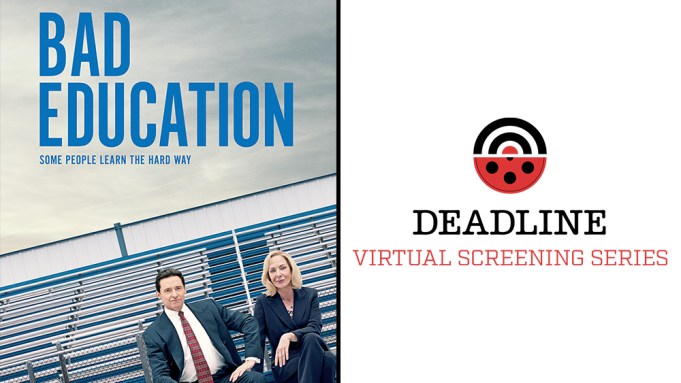 Telling the sordid true story of a man still very much alive but at the worst time in his life was a big responsibility for Hugh Jackman, one he took on despite the enormous pressure to get the story of disgraced Long Island schools superintendent Frank Tassone right. That is exactly what Jackman did in the HBO movie Bad Education, which garnered a reported $20 million in one of the biggest acquisition deals ever at a film festival when it was picked up by the pay-cable giant last gall out of Toronto.

“Frank was great, the best superintendent in the country. He was the highest-paid. He’d taken the Roslyn School to No. 4, and it was well on its way to becoming the No. 1 school in the country, and then, yet, he was part of this scandal, which was the biggest theft of public money, or public-school money, in American history,” Jackman told me when he appeared with co-star Allison Janney for Deadline’s most recent Virtual Screening Series panel. “And so, I was really intrigued by, A, the story, which I didn’t know of… but more importantly, how something like that can happen, how good people, people doing good things, careers in public service and education, can somehow find themselves slipping into a lifestyle or a belief that somehow this is OK.”

Janney plays Pam Gluckin, Tassone’s No. 2 and another school executive caught up in this amazing scandal, stealing over $11 million before getting caught and doing time. Neither star talked to their real-life counterparts, and still have not. So Janney and Jackson spent a lot of time researching every aspect of their lives and coming up with motivations for them.

“I decided for myself that it must’ve been some financial squeeze or pressure that she was under, or something that would’ve brought shame to her family,” Janney said. “And so, she took money, maybe intending absolutely to pay it back, but then realized that no one noticed, because she was basically writing the checks and reconciling them at the end of the month. So, I have to believe, my version of Pam, she intended to pay it back, but also there was a sense of entitlement, I think, that she began to have, that she deserved these extra things, because she was representing this school.”

Janney has played a real life person only one other time, and that was as Tonya Harding’s mother in I, Tonya, a role that resulted in an Oscar win for Best Supporting Actress. Both she and Jackman are heavily buzzed for Emmy nominations for Bad Education, but when they made the movie it was clearly intended for theatrical exhibition until HBO snapped it up.

“The fact that it’s gone to streaming and it has been seen by a lot of people, I think, is the new way of the world, and I’m kind of glad that a lot of people got to see it. And I had no idea, regardless of COVID, what would’ve happened theatrically, but my guess is not nearly as many people would’ve seen it,” Jackman said. “So, it seems to me there’s a lot of great quality happening on TV. There’s a lot of risks being made in TV in the last five, 10 years, and that I still do hope that there is room in the cinema for some of this kind of stuff too, you know?”

As for playing such morally complex characters, was it necessary to find ways to like them, too?

“I think you have your initial opinion, your personal opinion, and then you have to try not to judge your character. You can’t judge them, in order to play them accurately, I mean, we may judge, I judge myself sometimes, I guess, things I do, but it helps to try to humanize them by having some empathy for them, and trying to understand why they did what they did, not condoning it by any sort, but trying to understand it, and empathize,” said Janney, an approach her co-star fully agrees with and puts into practice as an actor.

“The only reason to tell that story is to kind of humanize the situation, make it a cautionary tale, and make us all look perhaps at ourselves, and areas of our life where we may do things that we may not be proud of,” Jackman said. “How do we move on from things that we may have done wrong? They don’t all have to be illegal, $12 million scams, but I think that is understanding why people do things, that’s really probably why I got into acting in the first place.”

Watch the conversation with Jackman and Janney above.