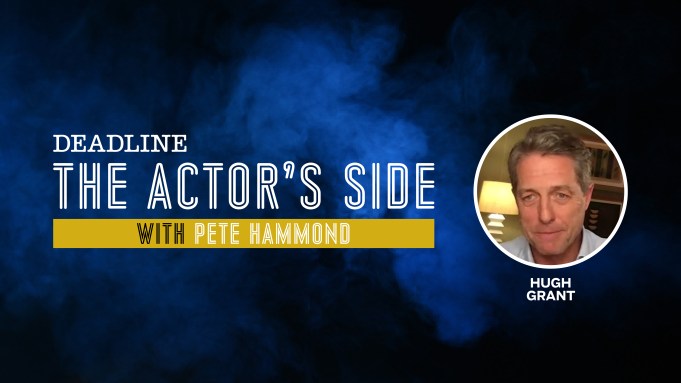 Just watch the clip we have chosen to show from HBO’s limited series thriller The Undoing and see how the camera focuses on Hugh Grant’s rapidly changing facial expressions in an unhinged state as he talks to his son while trying to escape the authorities pursuing him — you may just see a side of this successful British star you haven’t quite seen before on film. This is how we start the new season of my Deadline video series The Actor’s Side as I embark on a wide-ranging interview with Grant that reveals much about what makes him tick as an actor.

In addition to dissecting why he took on the role of a well-respected doctor who is also a suspect in the murder of his mistress in HBO’s buzzy mystery, in which he stars opposite Nicole Kidman and Donald Sutherland (the opportunity to play a “chilling narcisisstic  psychopath” was too alluring to pass up), he talks about a number of other things including a tentative desire to return to his roots on the stage, why he slowed down his career at one point after doing a rom-com that didn’t work (“Hollywood backed off me”), plus the alarming experience of doing TV where Twitter offers instant reactions.

Grant recalls his beginnings of “stumbling” into acting and still going strong after 38 years because he thinks he has gotten better in the past five years. He tells why the role in The Undoing, his award-winning work in A Very English Scandal, as an unrecognizable sleazy journalist in The Gentlemen, and a delightfully wicked BAFTA-nominated turn in Paddington 2 all have something in common  (other than just being proof of his resurgence). We also explore the reasons for his move away from his signature success in romantic comedies, a career path that began with Four Weddings and a Funeral and included such hits as Love Actually, About a Boy and Notting Hill; Grant says they have actually freed him to take a different direction, plus, he says, “I am too old and ugly to do more romantic comedies.”

He also tells me about the perks of movie stardom, the professional impetus for doing “violent exercise” in the morning,  why it is more rewarding to play character roles, and how having his kids and a new wave of interesting parts are keeping him from his own undoing in the business.