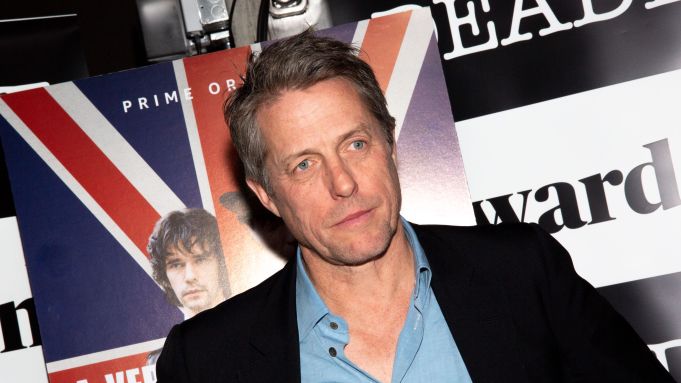 After playing a loveable rogue in Paul King’s Paddington 2 — a January release in the U.S. that was nominated for three BAFTA Awards — Hugh Grant entered more serious criminal territory with A Very English Scandal, the Amazon series directed by Stephen Frears.

Starring opposite his Paddington cohort Ben Whishaw, Grant plays Jeremy Thorpe, the charismatic leader of the British Liberal Party who was the subject of a major scandal between 1976 and 1979, forced to stand trial after he was accused of conspiracy to murder his gay ex-lover.

Speaking with Deadline’s Dominic Patten recently during the film’s Awardsline Screening Series panel in New York, Grant acknowledged his attraction to the true story’s salacious details. “Members of the establishment in their suits — who’d gone to Eton [College], who’d gone to Trinity College, Oxford — suddenly being revealed as having dark, gay secret lives and wanting to kill their ex-lovers, and the ex-lovers talking about biting the pillow and Vaseline, it was just marvelous,” he joked.

Preparing to play Thorpe, Grant didn’t have the benefit of first-hand perspective; the politician passed away in 2014. Offering the actor insights on the man, early on, were several members of the UK political establishment. The results, he observed, were contradictory.

One of the more interesting meetings Grant took was with David Steel — a figure portrayed in the series — who was naturally generous in his recollections of Thorpe, whatever it was that he really meant. “Clearly he f*cking hated him really, I think, especially for money,” Grant said. “It was a part of the whole scandal that was in the script and cut out for time, but that’s what the liberals really objected to, that Thorpe embezzled an enormous amount of very precious money. Because the liberals never had any money.”

During the Q&A, the actor gave his take on Britain’s political system, and how it has changed over time. The primary difference, he said, was that there was at one point a system that enabled Thorpe’s behavior—an “old boys’ network,” which would eventually dissipate.

“That’s, I think, one of the fun things about the series — you see Britain change in that way,” Grant said. While today’s Parliament is a world apart from the one in which Thorpe loomed large, the actor was quick to note the ways in which it’s failing even today. “Now of course, we have a different establishment based on the relationship between very powerful newspapers and newspaper owners — and their power to make or break a politician — and the politicians, and the police,” he added. “It’s sort of a unique situation because in the rest of the world, we all have to worry about state-run medias, where uniquely in Britain, we have a media-run state.”

Grant also reflected on the uncomfortable nature of sex scenes, and the way in which he looks at his career today.

“You know, I’m old and ugly. I don’t get offered leading man in a romantic comedy, and thank God for that. So, these strange things come drifting across my desk, and occasionally I think, ‘Yeah, I could have a go at that.’ You just try to be brave. I’m about to sign up for two things [where] I could easily fall flat on my face, so I’m sort of tormented by that. But I think you have to give it a whirl.”