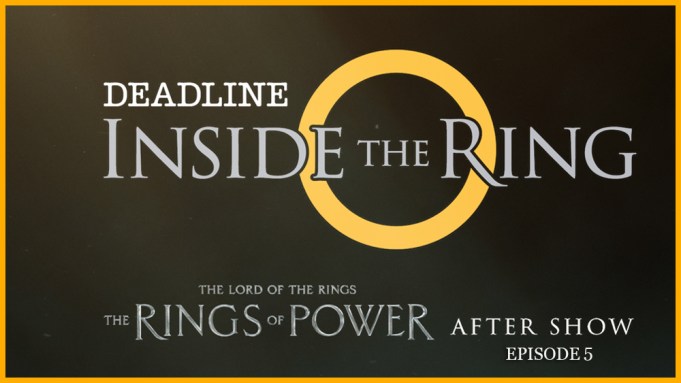 SPOILER ALERT: This video contains details & exclusive behind-the-scenes footage from the fifth episode of Prime Video’s The Lord of the Rings: The Rings of Power, which dropped on September 22. A new episode of Inside the Ring will debut every week of Season 1 of Rings of Power. Watch past episodes here.

“As it unfolds, I think what Galadriel represents for him is like a second chance, almost,” exclaims The Lord of the Rings: The Rings of Power’s Charlie Vickers of the pivotal dynamic between his Halbrand character and the Eleven warrior portrayed by Morfydd Clark in the resplendent Amazon Prime Video series.

“But, inadvertently in their relationship, she starts to pull him back towards things in his past which he might not be willing to revisit,” Vickers adds, leaning into a noble ancestry for Halbrand – as you can see in the video above.

Featuring never seen before behind the scenes footage, today’s edition of our video series Deadline’s Inside the Ring: LOTR: The Rings of Power after show pulls back the curtain on “Partings,” the fifth episode of the first season of Amazon’s adaptation of J.R.R. Tolkien’s work. The longest and perhaps grandest Rings of Power episode so far, the Wayne Che Yip directed and Justin Doble penned “Partings” brings together plots that have been brewing since the series’ debut, and literally launches an armada into battle in Middle-earth – a.k.a. make sure you are wearing your lifejacket, if you know what we mean?

There is little calm before the figurative storm as the Númenórean air is thick with intrigue as Galadriel tries to pressure and manipulate Halbrand in to take up a leadership role and join her in leading a grand alliance to free Middle-earth from the tightening grip of the Orcs. At the same time, tensions personal and political are rising in Númenór as grave concerns grow about being drawn into a bloody battle divide the citizens, the court, and the powers-that-be.

Over in the Southlands, the Harfoots’ migration survives a near fatal attack thanks to the Stranger (Daniel Weyman). As the Stranger’s power also brings chaos and fear, a mysterious trio looking for the Stranger emerge. Back on Númenór, amidst some very impressive sword play, possible young love, family feuds, and stark perspectives come into focus over the decision by the Queen Regent (by Cynthia Addai-Robinson ) to commit the Island kingdom’s ships and soldiers to Galadriel’s cause.

As well as Rings of Power stars Clark, Vickers, and Addai-Robinson, Inside the Ring is joined today by fellow cast members Trystan Gravelle (Pharazon), Ema Horvath (Earien), and Leon Wadham (Kemen) for the inside scoop on Partings. Additionally, episode director Wayne Che Yip, writer/producer Doble, and composer Bear McCreary sit down with us to give a behind the camera POV.

As we said, watch the video above to see it all.