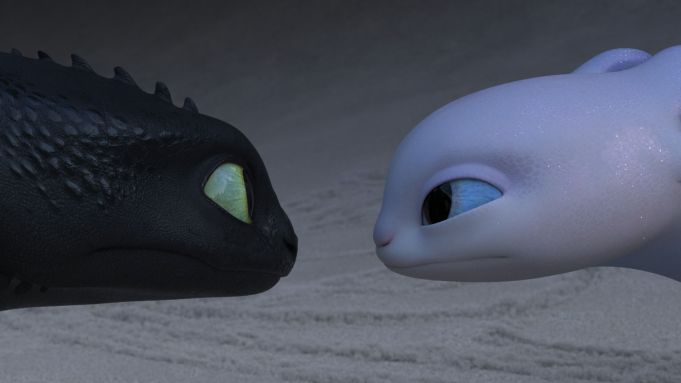 In the wake of Dreamworks Animation being purchased by Comcast, the third How to Train Your Dragon was a key part to relaunching the studio in the wake of Jeffrey Katzenberg at its new home with Universal Pictures. How to Train Your Dragon: The Hidden World wraps up the relationship between dragon rider Hiccup and his Night Fury dragon Toothless, as the former learns to let go as his pet falls for a Light Fury.

Fury dragon. As Hiccup leads his village’s dragons to a peaceful oasis known as the “The Hidden World”, he’s fending off a dragon slayer from his father’s past, Grimmel (voiced by F. Murray Abraham). But as Hiccup loses Toothless, he fully gains a life partner with Astrid.

Hidden World, which is the third How to Train Your Dragon movie in the franchise to be nominated in Oscar’s animated feature category (fourth Oscar nomination overall including John Powell’s original score on the 2010 movie), features some of the most lush, cutting edge animation of the trilogy in its Earth elements such as sand, ferns, and grass as well as textiles like leather, brass and metal seen in Hiccup and his dragon rider friends’ get-up. DeBlois and his team’s design of the Hidden World, lush with dragons flying in vibrant colors, brings to mind the epic landscapes that David Lean use to paint in Lawrence of Arabia and Doctor Zhivago. In fact, for DeBlois, it was 1966 British drama Born Free which was a key inspiration for him in making The Hidden World. He told Universal Pictures boss Donna Langley that during a meeting about his aspirations for the threequel, and that won her over, the movie being a favorite of hers.

In addition at last night’s Awardsline screening for Hidden World, producers Bonnie Arnold and Bradford Lewis detailed with DeBlois the production process for building a massive animated project, from sketch pads to final product. Watch their conversation above.

And as the animation has grown and developed over the last nine years, so has, of course, the character arcs as well. America Ferrera said that when it came to her character of Astrid, her “first recording was almost 12 years ago” before DeBlois and the first movie’s co-director Chris Sanders arrived to the project.

“Bonnie was a real champion for the character of Astrid,” says the Golden Globe-winning actress about Hiccup’s girlfriend; a role which was originally grittier in the original source material.

“Astrid was a concoction from our earlier conversations of wanting and needing a female character that could be a part of the action and important to the story. So, I’m very grateful to Bonnie and the others who created her because I could very easily see a world in which this movie, what was focused on adventure, Hiccup and Toothless, that there could very easily not be that representation of a young woman who has a real agency in the story.”

Ferrara said it was through her conversations with DeBlois that they together came to construct Astrid as someone “we hadn’t seen in an animated film before” with two characters “who go from being real foils to depending on each other and needing each other, and keeping the relationship more complex than just a romantic one, one where they grew up together and found who they were together.”

Said DeBlois, “Once we got to know America, we really were about funneling a lot of her qualities into the character: she’s very strong, she’s outspoken, she’s passionate, she’s competitive.”

Added the filmmaker, “Astrid represented the first to change (in befriending a dragon). If Hiccup could persuade her to take pause and get to know the dragon…he might have a chance with everyone else. She represented the pivot point from the start.”

Astrid has a great scene during the third act of Hidden World: When Hiccup feels all is lost in his efforts to the protect the dragons from Grimmel, it’s Astrid in a sublime motivational speech that gives him a backbone to go on. Also, not to spoil a lot, but Light Fury gets her chance to shine in the climax of the film.

With the release of Hidden World which has made well over a half billion dollars at the global box office, the trilogy has grossed over $1.6 billion worldwide. Despite success, unfortunately it doesn’t look like there will be a fourth film.

“I think it is the end. This is the bulls eye we painted for ourselves at the onset,” said DeBlois last night.

While DeBlois is working on a number of live-action features including Paramount’s take on the 1980s toy series Micronauts as well as Treasure Island for Uni, he remains in development on another long term project for Dreamworks Animation.