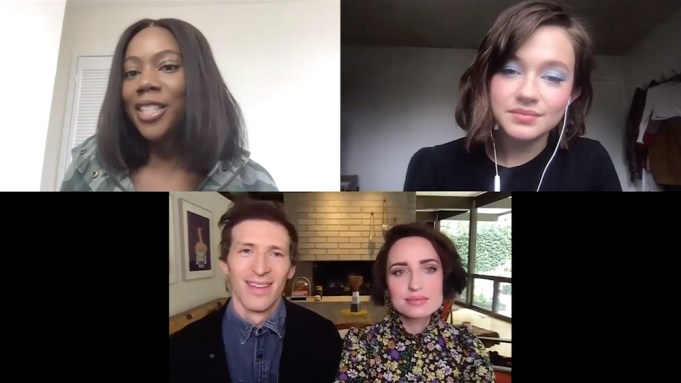 “We started conceiving of the film pretty early on in quarantine. We were facing such an unprecedented, as we all were, and being confronted with so many feelings that were so loud,” said star Zoe Lister-Jones, on how the Covid-19 pandemic inspired her latest film, the existential apocalyptic comedy, How It Ends, which she co-directed and co-wrote with partner Daryl Wein.

“A lot of those fears and vulnerabilities were leading us in our virtual therapy sessions, which were plentiful at the time and continued to do some like inner child work. And so we kind of channeled that into this narrative.”

Slated to its Sundance premiere today, the pic follows Liza (Lister-Jones), who on the last day on earth embarks on a journey through the empty streets of Los Angeles making amends with the people she has been estranged from before hitting up the end-of-the-world soiree. Along the way Liza is accompanied by her metaphysical younger self, played by Cailee Spaeny, who was also looking for an emotional release.

“I think we really needed some sort of release,” said Spaeny. “Lots of therapy sessions were happening. We’re doing socially distant, six feet apart walks, and there’s a lot of inner reflecting, maybe too much. I really had no idea where to put it so when we all came up with the idea to do something creative it was very exciting and was much needed for me during that time.”

The film features some all-star appearances from the likes of Helen Hunt, Olivia Wilde, Colin Hanks, Whitney Cummings, Logan Marshall Green, Fred Armisen, Bradley Whitford, Olivia Wilde, Lamorne Morris, and many more who filmed the project under strict Covid guidelines. “Each person that we encountered, they’re such incredible people and actors, said Wein, “and it was just like each one was a dream that we just never want it to end.”

While times still may seem bleak as the world continues to grapple with the global health crisis, the filmmakers hope this comedy can serve as a “form of catharsis.”

“For us and why this film came to be was because we were looking at ourselves in an introspective way and trying to not run away from a lot of those deep dark feelings,” said Wein. “I think it is important to take care of your inner child in so many ways and pay attention to what little you needs. So hopefully people will use this film as a little bit of a mirror.”