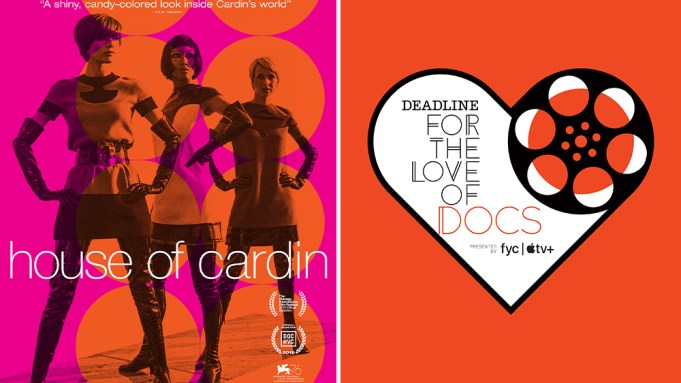 The documentary House of Cardin started out of pure fandom.

Husband directing duo P. David Ebersole & Todd Hughes were passionate collectors of Pierre Cardin items, not just clothes, but his furniture pieces; gosh they owned one of the few cars which bared his design logo.

Meeting the famed designer, then 95, in Paris to show off their portfolio of collectibles, he became smitten with them, saying “‘What do you want to do and when do you want to start'” remembers Hughes. That was Cardin’s forward question to a collaborator he was keen to work with: Get to work right away.

Ebersole and Hughes followed Cardin for a few years, whose near 100 year career not only spanned fashion, but costume design (the famed British TV series The Avengers, and Jean Cocteau’s movie Beauty and the Beast) as well as an experimental theater via which Gerard Depardieu was discovered. Cardin had nothing to hide, in particular how he was one of the first Parisian designers to sell out and license his name on a variety of items, a controversial move that some argue diluted his image over the years.

“He was the first and went too far and other people learned from him, and either followed in his footsteps or did something else,” says Hughes, “He did and wasn’t ashamed.”

Comparing him to American designer Halston, who saw the ruin of his empire through over-branding, Ebersole points out that “Halston sold his name and that was his downfall whereas Cardin never sold his name, he only licensed the use of his name, allowing people to make things under his brand. But he always maintained ownership of Pierre Cardin Paris.”

House of Cardin made its world premiere at the 2019 Venice Film Festival where it was nominated for the Queer Lion Award.  It went on to win the Lifetime Achievement, Best Fashion Feature Film, and Best Director of a Feature Fashion Film Awards at the Cinemoi Cinefashion Film Awards, and was also nominated for the Gold Q-Hugo Award at the Chicago International Film Festival. Hughes and Ebersole also produced the Utopia docu with Cori Coppola.