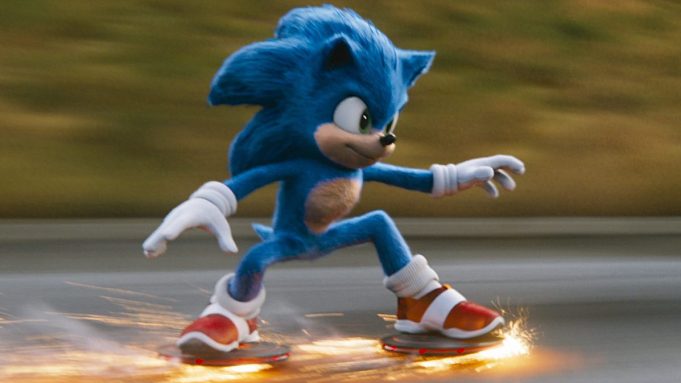 Paramount will have a big footprint during Super Bowl Sunday with as many as four spots, potentially more than any other studio this year. After dropping the Super Bowl ad for their Memorial Day weekend release The SpongeBob Movie: Sponge on the Run yesterday, here’s Paramount’s second Super Bowl ad for their Presidents Day release Sonic the Hedgehog, a feature adaptation of the classic Sega videogame.

“When it comes to speed, there’s only one name,” says Thomas.

“I’ve raced the fastest in the world. He makes us all look slow,” adds Felix, who is the only female track and field athlete to win six Olympic gold medals.

“He’s just a blur our there,” says Busch.

At which point all four athletes question why they’re saying all these nice things. As they look off camera, we see it’s Sonic directing them.

“I have no idea,” responds the rodent, “but please, McCaffrey, go on about how amazing I am.”

In the movie, which is set to open to $47M over the 4-day Valentine’s Day/President Day holiday, Sonic (Ben Schwartz) and his new best friend Tom (James Marsden) team up to defend the planet from the evil genius Dr. Robotnik (Jim Carrey) and his plans for world domination. Jeff Fowler directs from a screenplay by Pat Casey & Josh Miller. Pic is produced by Neal H. Moritz, Toby Ascher, Toru Nakahara, and Takeshi Ito. EPs are Hajime Satomi, Haruki Satomi, Masanao Maeda, Nan Morales, and Tim Miller.

Sonic the Hedgehog opens on Feb. 14.

Paramount is also expected to air a Super Bowl trailer during the pre-game for A Quiet Place II (March 20), and it’s being buzzed that they’ll have a trailer on Sunday for Tom Cruise sequel and Skydance pic Top Gun: Maverick (June 26).