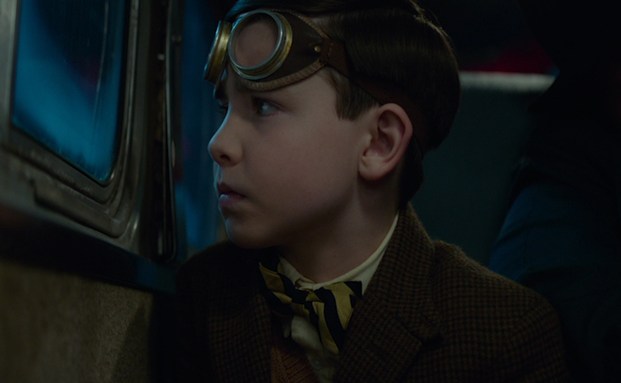 Looking at the new movie adaptation of the 1973 book from John Bellairs, it doesn’t take much to guess that it comes from Steven Spielberg’s family movie factory, Amblin. The House with a Clock in Its Walls is tailor made for at least this part of the Spielberg brand, but as I say in my video review (click the link above to watch), the really surprising thing is that horror maestro Eli Roth is the director. That’s right. The man behind terrifying flicks like Hostel is working way out of his comfort zone, but thankfully not his league, as the Spielbergian touch seems to have rubbed off on him in this lively kids movie that does exactly what you might expect and even manages to keep its wits intact. With so many films in the genre animated, this live-action treat for tykes is something rather fresh.

Jack Black, back in Jumanji territory, plays a warlock living in a ghostly old Victorian-looking house in a suburban neighborhood circa 1955 who adopts his orphaned nephew Lewis (Owen Vaccaro) and introduces him to a brand-new world of magic and weirdness. The production design is to die for, a little bit of Hugo influence clearly, but cool all the way around as it serves the actors and story well. Cate Blanchett deliciously plays next-door neighbor and best friend Florence Zimmerman, who takes a maternal liking to young Lewis but also has her own demons to deal with as the magic gets out of hand.

Lewis, obsessed with the Captain Midnight serial and wearing weird-kid aviator goggles all the time, probably is the least popular kid around. He is so disliked that he can’t even get picked for a basketball team — even before one kid with crutches and two broken feet does before Lewis finally lands on a team out of pity. He doesn’t disappoint. He’s hopeless on the court. He does have one friend, Tarby Corrigan (Sunny Suljic), who is civil to him, which is a good thing. There are eventual plot complications with the emergence of Isaac Izard (Kyle MacLachlan), the mysterious former partner of Black’s character who has plans of his own to disrupt the order of things.

Everything builds to a crescendo, as it always does in these kinds of movies, but this one is kinda sweet. It feels straight out of the 1980s, no question, despite its mid-‘50s setting and a reference to Holocaust survivors within its otherwise in-your-face plot machinations. Blanchett, with perfect line readings and a real understanding of just who Florence is in all her vulnerability, is the standout here, perfectly balancing Black’s usual scenery chewing. Colleen Camp turns up as the busybody neighbor across the street who just can’t help putting herself in the middle of things, concerned mostly about noise and what trouble this new kid in town just might cause. Vaccaro nails it as the latest kid star from the Spielberg universe; you really feel for him, bizarre behavior and all.

As the first of the Halloween-themed kids fare out of the gate this year, The House with a Clock in Its Walls acquits itself nicely for its target audience, who likely won’t be disappointed with what they see here. This clearly is designed as a potential franchise for Amblin and Universal. It has the elements to go further with some very appealing characters, and the younger members of the family will enjoy tick-tocking the time away with it. Producers are Bradley J. Fischer, James Vanderbilt and Eric Kripke (who also wrote the screenplay). Universal releases it wide today.

Do you plan to see The House with a Clock in Its Walls? Let us know what you think.