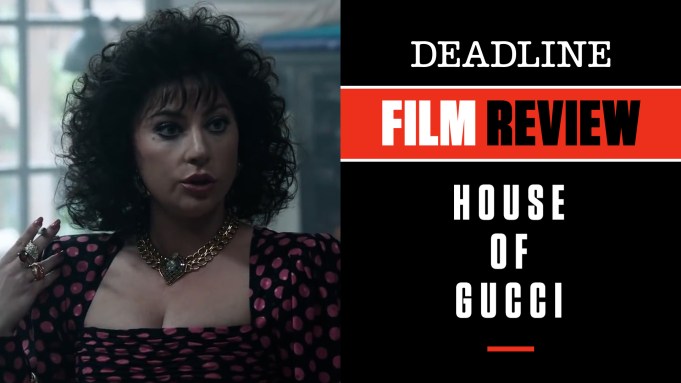 House of Gucci isn’t even 82-year-old director Ridley Scott’s first movie this fall. His underrated The Last Duel had that distinction, but this sometimes overloaded and overlong but nonetheless highly entertaining saga spanning three decades in the life of the infamous Italian fashion empire delivers the goods, especially with a top-drawer cast throwing it all against the wall.

Twenty years, and many attempts, to bring this story based on Sara Gay Forden’s bestseller The House of Gucci: A Sensational Story of Murder, Madness, Glamour, and Greed finally have resulted in Scott’s version of the true tale hung on the headline-grabbing murder of Mauricio Gucci (Adam Driver) at the hands of hitmen hired by his ambitious and tempestuous ex-wife Patrizia Reggiani (Lady Gaga). Scott begins the film on the day of that killing — March 27, 1995 — but quickly flashes back three decades as all the players in this Shakespearean-styled Italian drama are sorted out. Roberto Bentivegna is the screenwriter who finally cracked the code after previous attempts including one by another credited screenwriter Becky Johnston, who also has Story By credit.

Plot-wise, the Gucci company and brand is handed down to brothers Rodolfo (Jeremy Irons) and Aldo (Al Pacino) from the father and founder Guccio Gucci. The former is more laid back and not as interested in the power game here, but Aldo is aiming for glory and control with a desire to take the Gucci name into far more commercial areas including even knockoffs of the exclusive product in order to grow the empire. In turn, their own sons are brought into the fray, with Rodolfo’s Mauricio more inclined to make a career in the law than to join the family business, while Aldo’s son Paolo (Jared Leto) has his passion in actually designing but really is kind of a lightweight when it comes to the financial side of things. His father knows this but loves the doofus anyway.

Enter Patrizia as Mauricio meets, falls in love with and marries this outsider from humble a background who becomes the key factor in encouraging him to slowly take charge of the Gucci business with her in tow. She ironically has much more in common with the way Aldo runs things, so they are oddly sympatico. Eventually with her support, and that of family financier Domenico De Sole (Jack Huston), Mauricio develops his own dark side in quietly engineering an eventual coup.

But things get, uh, complicated, as deception and divorce take center stage, and he embarks on an affair with another intriguing character in this tangled web, childhood friend Paola Franchie (Camille Cottin). Amusingly on the sidelines but soon to figure heavily in Patrizia’s ever-churning devious plans is TV psychic Pina Auriemma (Salma Hayek, who in real life is married to the man currently with controlling interest at Gucci).

It is all stretched out into a family melodrama that makes the machinations behind Succession pale by comparison. Scott deftly manages it all with a cast of players that can’t be topped. Lady Gaga sinks her teeth wholeheartedly into Patrizia’s world, subtly registering her climb into the center of the action. With a thick accent that could be mistaken for Russian but actually is pure Patrizia, Gaga proves A Star Is Born was just a warmup and completely resists any inclination to turn this woman into a caricature. In fact she refused to meet with the real Patrizia before filming, not wanting to become another pawn in her game.

Driver, who most recently worked with Scott so effectively in The Last Duel, is utterly credible as a man sucked into this web of deceit and power grabbing but doing it his own underhanded way. Considering we are just months away from the 50th anniversary of The Godfather, it is fascinating to see Pacino, vintage Pacino, take on a role in another Italian saga that could be a distant cousin of the Corleones. He’s terrific.

Not to be outdone, and unrecognizable under six hours of makeup and prosthetics, Leto looks like he is having a blast playing the not-so-bright son of Pacino’s character. Irons is always welcome but doesn’t get as much to do as the rest of this Oscar-winning and -nominated cast. Among others in the large ensemble is Reeve Carney, who turns up later in the film as Tom Ford. The production values are, as you might expect, top notch and the Italian locations delicious.

As the book’s subtitle indicates, this is a “sensational story of murder, madness, glamour, and greed,” and Scott — who has delved before into the land of the uber-rich family empires with All the Money in the World — steers it all into a somewhat old-fashioned star-driven movie drama that studios seem to shy from these days. My guess is House of Gucci might be just the kind of lurid entertainment adults may be craving. If this one doesn’t help in driving that older audience back to the multiplex, I am not sure what will.

MGM and UAR open it Wednesday exclusively in theaters, and this not-so-loving family gathering seems oddly ideal for Thanksgiving. Producers are Scott, Kevin J. Walsh, Mark Huffam and Giannina Scott (who is the force who shepherded the project for two decades). Check out my video review above with scenes from the film.

Do you plan to see House of Gucci? Let us know what you think.