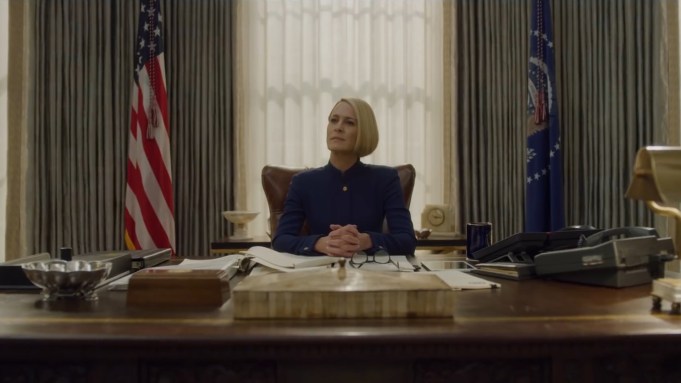 There is no Kevin Spacey in the November 2-launching sixth and final season of House of Cards. But the now disgraced Oscar winner still dominates the Netflix political drama almost as much as he did in the past, to the detriment of the series now led by Robin Wright.

Despite the “my turn” final words from now-President Claire Underwood that capped House of Cards’ Season 5, the eight-episode conclusion from returning showrunners Melissa James Gibson and Frank Pugliese is ultimately unfulfilling once you get beyond the obvious changes, as I say in my video review above. That old House of Cards magic is just too little seen in what should be a liberation not a sedation in action.

Always more flag-planter than game-changer for the streaming service from when it debuted in 2013, the often-captivating dynamic of HoC was the shared ambition and individual resentments of Spacey and Wright’s characters. No spoilers, but in trying to salvage the series from certain death after multiple sexual misconduct allegations swirled around Spacey last fall, leading to him being fired off the show, the reset result feels too rushed and tacked together. As a result, despite the best efforts of Wright, the story on the screen isn’t quite the real story it should be.

In the rewriting to replace the initial Season 6 that was not to be, the addition of Diane Lane and Greg Kinnear as old friends of Claire’s and sibling billionaire string-pullers who seem to have much more power than all of Washington DC put together throws Cards‘ backstory askew.

Picking up about 100 days after the deeply unpopular Claire has taken office, Wright is regal, widowed and calculated as the first female occupant of the Oval Office. Only anyone who has been under a rock the past two years wouldn’t see that the once First Lady and Vice President’s new station in life is a bit of 2016 election fantasy fulfillment too. However, what should be a timely victory lap for Wright in fact struggles to get traction. The Beau Willimon-created series, and Wright, work too hard and too unsuccessfully to find the light outside the shadow of Claire’s dead husband and predecessor, and by default Spacey himself.

In creative territory that the original 1990s UK series on which the Netflix show is based is never ventured into, the sixth and last season of House of Cards is worth taking a peek at because, well, it’s House of Cards and it put in the work to get where it is. The flip side is that the series seems to be exhausting itself from the get-go and putting pedal to the metal mainly to get to the end of the road.

Click on my video review above to see more of my take on the final season. Will you be back for Claire Underwood’s America later this week?