Continue to Deadline SKIP AD
You will be redirected back to your article in seconds
Skip to main content
January 10, 2022 3:07pm 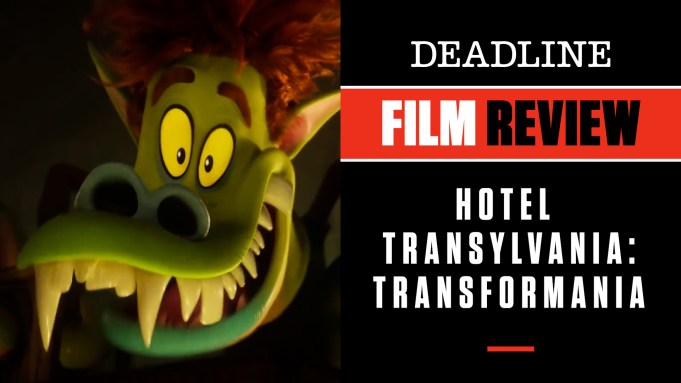 There’s more than one good reason Sony has sold off to Amazon its fourth entry in the Hotel Transylvania animation franchise. For starters, its most bankable star, Adam Sandler, is AWOL on this one, replaced as Drac by voice actor Brian Hull, certainly limiting the promotional opportunities. Add in the mixed reception family films like this one are getting in theaters as the pandemic rages on. Another reason could be Genndy Tartakovsky, who wrote and directed the first three much better editions, has handed off directorial reins to Derek Drymon and Jennifer Kluska, though he’s still writing (with Nunzio Randazzo and Amos Vernon) and executive producing here. They do a serviceable job but jettison most of the wit and more sophisticated aspects of the franchise in favor of sheer non-stop frantic antics clearly aimed at keeping attention spans of the young target audience. You just wish they would pace it better than warp speed at certain points.

Although Hull does a pretty good imitation of Sandler’s take on Drac, the character has less to do than usual in favor of increased focus on human Johnny (Andy Samberg) and daughter and Johnny’s beloved Mavis (Selena Gomez). Perhaps giving Gomez executive producer credits had something to do with the elevation storywise as well?

In this one, Drac, celebrating the 125th anniversary of the Hotel Transylvania, had planned to turn it all over to Mavis and Johnny. But once hearing Johnny’s not-so-hot business sense he changes his mind and makes up a story that the hotel contractually can’t change hands into a situation where a human can be in charge. What to do? Johnny, with the help of Van Helsing’s (Jim Gaffigan) gadget The Monsterfication Ray actually turns into a very colorful monster himself, but in the chaos of it all the gadget does the reverse to the actual monsters by turning Drac, and all of them, into humans. The Freaky Friday premise is fairly amusing as far as it goes as there is lots of shtick involving the various characters in their human incarnations (who knew invisible man Griffin, usually seen only as floating glasses, was actually naked in the first three films?). Plotwise, Drac, joined by Johnny, must head to the Amazon for some reason in order to find the magic crystal that will undo all of this and get things back to normal.

What Hotel Transylvania: Transformia has to recommend it is some sharp voice performances and lovable characters with audience goodwill from the past films. Chief among them is Steve Buscemi voicing Wayne the Werewolf, Keegan-Michael Key as Murray the Mummy and David Spade taking on the aforementioned Griffin. Of course, Fran Drescher’s unmistakable vocal work as Eunice dominates whatever scenes she has. Her significant other, Frank (as in Frankenstein, voiced by Brad Abrell) is pretty funny this time around as he falls in love with his own human form in adoring ways. Gaffigan’s Van Helsing, villainous before, is kind of just a nice, eccentric, doddering grandfather type here amidst all his flurry of inventions. Fortunately, that slab of green Jell-O known as DJ Blobby gets screen time too.

The animation doesn’t break new ground here but works well visually, especially with the new human forms to play around with on this familiar monster gang. There’s not a whole lot though in this noisy, busy concoction to engage anyone but the youngest consumers this time around.

Check out my video review above with scenes from the movie. Do you plan to see Hotel Transylvania: Transformia? Let us know what you think.