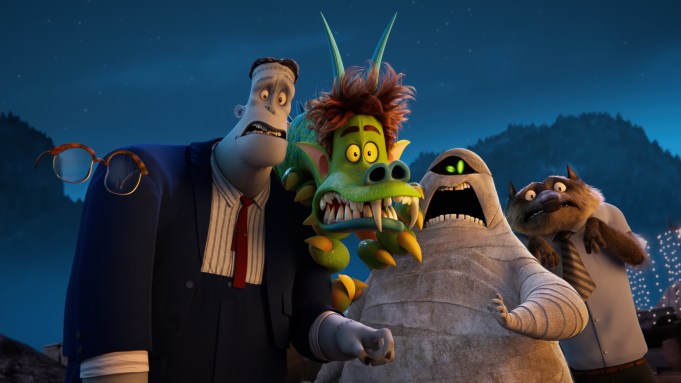 EXCLUSIVE: Welcome (back) to the Hotel Transylvania — such a lovely place, such lovely faces.

Here is a new look at Hotel Transylvania: Transformania, the fourth and final film in the franchise that has bitten off $1.36 billion worldwide — thus far — with each of the three pics grossing more than its predecessor.

Check out the trailer above, three first-look photos below and the updated poster at right.

Fast-forward to 2021, and Van Helsing (Jim Gaffigan) has perfected his mysterious invention that allows humans to become monsters. But the Monsterfication Ray goes haywire, and Drac (Brian Hull, replacing Adam Sandler) and his monster pals are all transformed into humans, and Johnny (Andy Samberg) becomes a monster. In their new mismatched bodies, Drac — now stripped of his powers, sporting a “dad bod” and making dad jokes — and his exuberant son-in-law Johnny, who’s loving life as a monster, must team up and race across the globe to find a cure before it’s too late. With help from Mavis (Selena Gomez) and the human Drac Pack, the heat is on to find a way to switch themselves back before their transformations become permanent.

“In Hotel Transylvania: Transformania we wrap up the franchise with a bang as we see our familiar, beloved cast of monster characters in a hilarious new light when they accidentally transform themselves into humans,” helmers Kluska and Drymon said. “The bond between the mismatched comic pair of human Drac and monster Johnny is put to the test on a ridiculous road trip to South America while Mavis leads the humanized Drac Pack on an adventure to find the cure. At their heart, the Hotel Transylvania movies are about family – monster style. We think the final chapter will bring the story full circle in a thrilling fun theater experience for the whole family.”

Here are those fresh looks at Hotel Transylvania: Transformania.