Continue to Deadline SKIP AD
You will be redirected back to your article in seconds
Skip to main content
March 2, 2020 3:57pm
3Comments 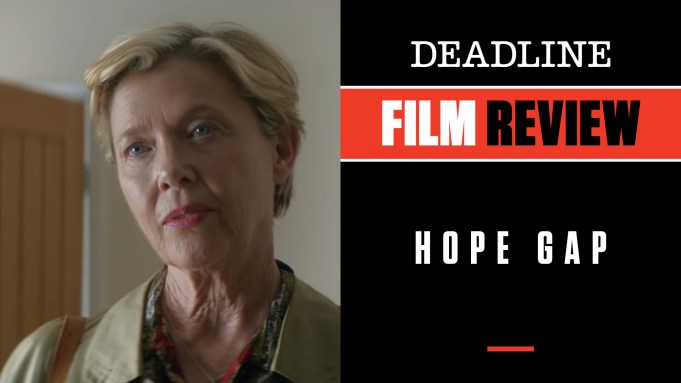 It says a lot to proclaim Annette Bening’s portrayal of a woman in denial about her failing marriage in Hope Gap as one of the very best of her career. Yet it most definitely is. Sporting a nifty English accent, the four-time Oscar nominee hits new notes of authenticity and power as Grace, a wife of 29 years who is surprised and devastated when her husband suddenly says he wants out. That is the premise of this raw and revealing look at the effect of a breakup on not only the two at the center of it, but the entire family unit. It is something writer-director William Nicholson knows well as this very personal film was inspired by his own reaction to the end of his parents’ 30-year marriage. This isn’t directly their story, but one that may strike universal chords among families who have been through this kind of traumatic experience.

Grace (Bening) and Edward (Bill Nighy) live comfortably in a beautiful  oceanside home on the English coast. They have a devoted grown son Jamie (Josh O’Connor) who is summoned home from London to visit for the weekend. After a tense dinner in which Grace, who is retired and devoted to putting together an anthology of poetry, challenges her husband to put some more life and work into their relationship,  Edward privately tells Jamie the real reason he asked him to come. He has met Angela, a mother of one of the students at the school where he teaches, and has decided to leave Grace and move in with her immediately. Jamie is clearly confused by this news and by the fact his father wants him to stay behind for a few hours after he tells his wife and leaves for a new life. When he does that, she goes straight into full denial, ultimately apologizing for being too harsh on him and promising to do better. He maintains that it is over, that he never felt he could live up to what Grace expected of him, and heads off to Angela’s, finally free of a union that really existed only for the love of their son.  As the movie progresses, Grace keeps trying to turn it around until it becomes apparent there is no going back.

For his part, Jamie finds it not only hard to deal with the breakup of his family, but also the effect it has on his own relationships. Nicholson, perhaps channeling his own life, makes Jamie the centerpiece of all of this as brittle truths are uncovered and his parents head for divorce. It is a hard fact of life to take, but ultimately the drama unfolds in a way that feels like real life.

I cannot say enough for what this superb trio of actors brings to these roles. It all feels so intimate that it could be a play, but Nicholson in choosing the town of Seaford makes the setting singularly cinematic. Bening gets right to the core of Grace, a woman with spirit who refuses to accept what her husband is doing and almost desperately tries to turn it around, even with the sad fact her marriage may not have ever been what she believed it was. Nighy almost never smiles in this role, stoically portraying a man with little ambition and the need for a companion to accept his shortcomings as he sees them. He’s completely believable here, as is O’Connor (currently Prince Charles in The Crown, and again opposite Nighy in Emma), ideally cast as a young man who never dreamed this could happen to his family, and who has to become a go-between as a new reality sets in. There are especially poignant moments here as well, and some very funny ones especially when Grace decides to get a dog as a new companion and names him Edward. The line she throws at the dog in the lawyer’s office, “Edward, stay,” not only draws a laugh but also says more than you can imagine about her state of mind. Hope Gap is a compelling and rich human drama with acting that is just about as good as it gets.

Producers are David M. Thompson and Sarada Medermott. Roadside Attractions puts it in limited release Friday. Check out my video review above with scenes from the film.

Do you plan to see Hope Gap? Let us know what you think.