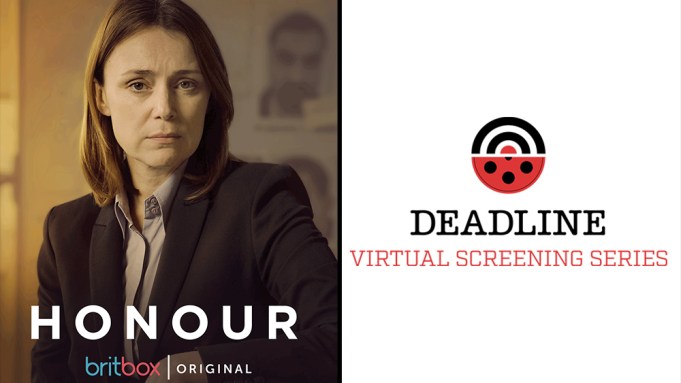 Director Richard Laxton and writer Gwyneth Hughes joined me Thursday night for Deadline’s Virtual Screening Series presentation of the British thriller Honour, a two-part limited series from BritBox (the streaming home created by BBC and ITV for the best of British entertainment). Both are veterans of the genre and deliver the goods with this effective and quite riveting TV drama. The real-life story centers on the near-obsessive investigation of DCI Caroline Goode (Keeley Hawes), who discovered that a young woman named Banaz Mahmod had been to the police five times to report threats on her life from her own family and is appalled to discover she was not taken seriously, even given multiple opportunities to prevent this so-called “honor  killing,” a family tragedy more common in some ethnic communities than you might think. The show is about Goode’s never-give-up attempt to bring justice.

Hughes, who counts true-crime stories among her specialties, told me how she stumbled on to this one and why it was worth the extensive time and research to dramatize it. “Yes, something so uniquely horrible and awful, it’s under the radar somehow for a lot of people,” she said. “I remember this girl. I remember her photograph in the newspapers in London when she died, and she was a very beautiful young woman, a very gentle-looking, very lovely young person, and I couldn’t believe the story I was reading. I couldn’t believe that this young woman had been killed as a result of a hit. I mean, her own family ran a hit on her. Ultimately, some years later, five men went to prison for life for that murder because of the incredibly dedicated work of the heroine in my film, but later, many years later, after looking for a drama, I remembered her. I remembered that lovely face and that horrible story, and I didn’t hesitate, I said, ‘Oh yes, I’d love to tell that story,'” she added comparing the act of writing in this case to what someone might do at a newspaper.

“Well, it’s a kind of journalism, in a way,” Hughes said. “It begins like journalism; you just have to meet everybody involved. I mean, you have to meet them and spend time and really pin your ears back and write down everything they say in your notebook — in your terrible shorthand, if you’re me, and I was a journalist, years ago. I mean, it’s a long time since I’ve had that job, but it begins in the same way, that you’re looking for the through-line, you’re looking for what this really means, you’re looking for how you can tell this story in a way that will be appealing and also challenging and to reach the widest possible audience/ That’s why, you know, I went into drama, to do these kinds of stories because I was a documentary maker for a long time. But even these days, when documentaries are very fashionable and they’re winning Oscars and things, it’s still in my new audience compared to what would come to a show with really great actors and really great directing, and that’s why we do drama, isn’t it — to make these stories so that everybody will want to watch them? It’s not called broadcasting, you know, for nothing.”

Like Hughes, Laxton recalled the actual case, but he took on the assignment for very specific reasons he thought he could offer as a veteran director in so many different genres. “I remembered the original case, and I remembered her face, Banaz Mahmod’s face, in the papers, but when I read it, I was totally captivated by Gwyneth’s screenplay,” he said. “And the reason I was captivated by it was because I learned something I didn’t know when I read it, I felt like through what is a really, really well-crafted screenplay, I learned something huge about the culture and horror of honor-based abuse and violence, and the leading character, who took me — as if you like the ignorant reader — through this story because when we meet her, she doesn’t know anything really either about honor killing, so it’s a fantastic opportunity to teach the audience.”

He added: “Now, you know, one thing I love about directing is you can hopefully, to the widest audience possible, kind of promote a sense of reflection, education and perhaps an emotional intelligence and kind of insight into various human beings — the way we behave, good and bad, and the nuance of all those things. At the moment, we live in a society which is polarized by decision-making of ‘Yeah something is bad and no something is good,’ and actually, there is no, for me and hopefully people who I would choose to be around in my life, honor killing. Honor-based abuse is not in any way excusable or acceptable, but to learn something about it via a protagonist, who herself started the story doesn’t have really any understanding is gold dust because you can’t, as they say, teach the audience.”

To watch portions of our conversation, just click on the link to the video above. Honour can be seen on BritBox.