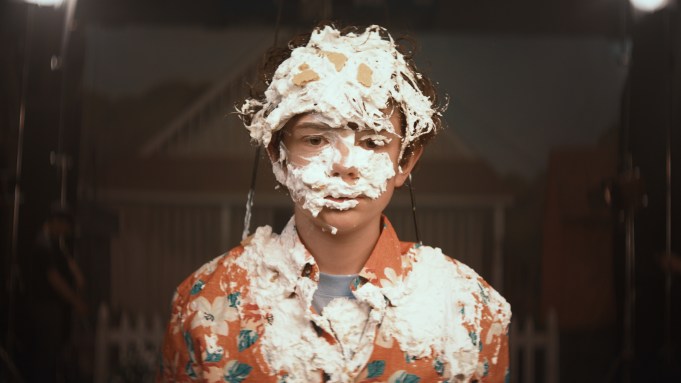 Honey Boy might be Shia LaBeouf’s fictionalized version of his troubled, young child-star life, but anyone who followed the actor back in his Even Stevens days will know exactly who this film is about after watching the new trailer.

In a scene that could have been lifted entirely from LaBeouf’s old Disney Channel kid series, a child star – dressed in those familiar baggy pants, loud print button-down over long-sleeved T, sneakers – gets a pie in the face and is hoisted over set by stage wires, dangling in mid-air.

The new trailer comes from Amazon Studios (the company picked up the rights for $5 million earlier this year). Director Alma Har’el, working with LaBeouf’s script, won the U.S. Dramatic Special Jury Prize for Vision and Craft at this year’s Sundance Film Festival.

LaBeouf based the screenplay on his own experiences, telling the story, as Amazon describes, of a young actor’s stormy childhood and early adult years as he struggles to reconcile with his father and deal with his mental health. The ascent to stardom, and subsequent crash-landing into rehab and recovery, is enacted by Noah Jupe (A Quiet Place) and Lucas Hedges (Manchester by the Sea) as different ages of the LaBeouf-based actor Otis Lort.

LaBeouf himself plays a version of his own father, an ex-rodeo clown and a felon. “How do you think it feels to have my son paying me?,” the father asks his young son.

“You wouldn’t be here if I didn’t pay you,” replies the kid.

The film also features dancer-singer FKA twigs in her feature-film debut as a neighbor and friend to the younger Otis.

Amazon Studios releases Honey Boy to theaters Nov. 8. Check out the official trailer above, and the official redband trailer, with a few added F-bombs, below.