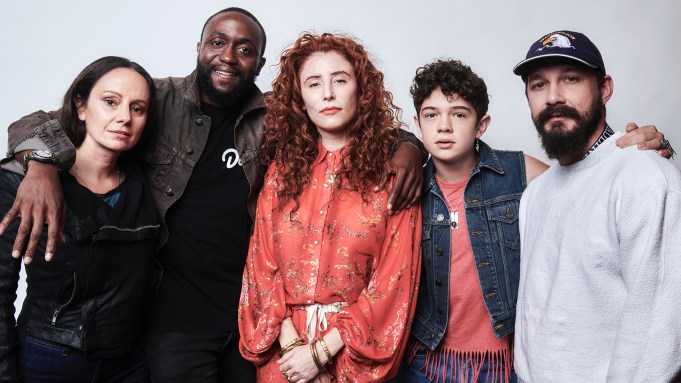 For anyone who has gone through the pain of a family member who has weathered substance or alcohol abuse, or even the roller-coaster ride of being a child actor, Alma Har’el’s feature take on Shia LaBeouf’s childhood, Honey Boy, is a cathartic experience.

LaBeouf was spurred to write the story when he was in court-ordered rehab, about his hardened early life with his drug-addled father. While in rehab, LaBeouf sent pages to Har’el, a filmmaker he befriended and became wowed by after picking up her documentary Bombay Beach at LA’s Amoeba Records.

“It echoed really deep,” when she first read those pages, Har’el told the crowd at Deadline’s The Contenders Los Angeles awards-season event. She too had a father who battled alcoholism. “The stuff you kind of want to tell everybody your story and somebody else has to step in and tell it in their own words,” she said about relating to LaBeouf’s screenplay.

To create an experience where “it all feels like it’s in his head,” Honey Boy DP Natasha Braier shot the movie with a textured vision, mixing fantasy with reality, a mode that sets this biopic apart from other showbiz ones you might have seen before. Noah Jupe scored the role as young Shia in the wake of breaking out in A Quiet Place, impressing the filmmakers with his improv skills opposite LaBeouf who played his own dad.

Jupe dove into the role, juggling with LaBeouf and literally wearing the actor’s old clothes. Upon meeting LaBeouf, “he took off his hat and put it on my head…From that point on it felt like someone pressed fast-forward on a video…and this crazy sort of spiritual wonderful thing.”

LaBeouf also recounted the daunting task of finally finding the ending to his film, journeying to his father again after seven years of not speaking to or seeing him.

Har’el received a special jury prize at Sundance for Honey Boy, with the pic scoring four Spirit Award noms including best director for Har’el, supporting male for LaBeouf and Jupe, and cinematography for Braier. The pic, acquired by Amazon for $5 million out of Sundance, is currently in theaters.