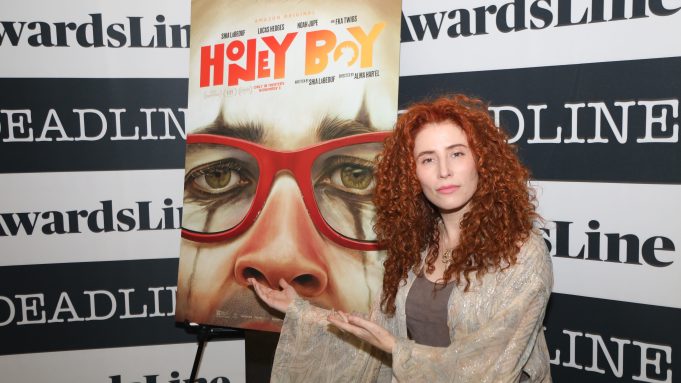 In the wake of $5 billion-global grossing career, actor Shia LaBeouf turned from golden boy to pariah in town following car crashes, angry outbursts and a 2014 disruption of Broadway’s Cabaret (which starred Emma Stone at the time) that led to him pleading guilty among other episodes.

Emotional pain, would be an understatement to describe what LaBeouf was going through. And to feel his pain, see Honey Boy, the autobiopic about his childhood that he wrote, stars in and was directed and produced by his close friend, Israeli filmmaker Alma Har’el who we recently spoke to at this week’s Deadline screening series.

More than just the story about LaBeouf’s abusive childhood with his rodeo clown, drug-addicted father who was the boy’s guardian during his early booming career, Honey Boy is a story that transcends and speaks to anyone who has lived with alcohol or drug abuse in their family. It’s a touching story, not a Mommie Dearest one in which we see that both father and son love each other, despite the former’s vicious barbs.

The movie recently received a standing ovation at its London Film Festival premiere earlier this month where Elle Fanning and Max Minghella were in attendance at the Vue in Leicester Square. Amazon was so moved by the movie, they shelled out $5M for it following its Sundance world premiere back in January.

Amoeba Records in LA was how LaBeouf discovered Har’el. He was looking for a Bob Dylan documentary and came across her Tribeca Film Fest-winning doc Bombay Beach (which only had Dylan music in it) about the poor people living in California’s Salton Sea area. He was so moved by her work, he sought Har’el out and funded her next doc LoveTrue.

At a certain point LaBeouf was ordered to a court-ordered rehab and diagnosed with PTSD. He was ordered to write out his memories, which is where the story for Honey Boy blossomed. Sending pages to Har’el, she insisted that LaBeouf’s journals demanded to be a film.

When LaBeouf was released from rehab, Har’el and him realized the pic needed an ending.

They workshopped some endings, but part of making the movie meant getting the greenlight from LaBeouf’s own father, who he hadn’t spoken to in seven years. The actor ventured down to his father’s home in Costa Rica, where he received his father’s notes about a keeping a key chicken in the film, plus to make sure the son made his dad look good in the movie (LaBeouf plays his father). Lucas Hedges plays the older LaBeouf (named Otis in the pic) while young British Ford vs. Ferrari and A Quiet Place actor Noah Jupe played LaBeouf’s younger self. LaBeouf got the film on the Blacklist and they soon found supporters for the project in producers Anita Gou, Daniela Taplin Lundberg and Automatik’s Fred Berger and Brian Kavanaugh-Jones.

Honey Boy comes out theatrically on Nov. 8. Watch our interview with Har’el above.