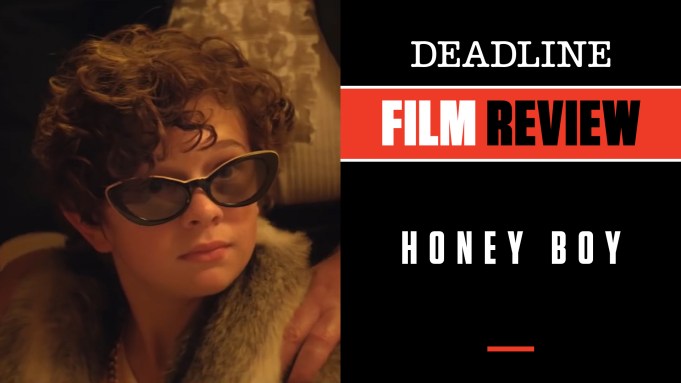 The names have been changed in Honey Boy, but Shia LaBeouf, as not only a co-star in the film but also its writer, is not trying to hide the fact that this is the story of his life, no matter what poetic license may be taken it its telling. And what a story it is, a raw and revealing movie in which two actors in different time periods essentially play this star whose well-documented troubles nearly deep-sixed a promising career. More importantly, it sent him on a downward spiral that might have ended tragically, as we have seen so many times with kid stars trying to grow up in the spotlight and succumbing to various pressures.

In her feature directorial debut, Alma Har’el expertly navigates this fictionalized tale inspired by LaBeouf’s life as a successful child star who deals with an abusive father and years later finds himself traversing the pitfalls of movie stardom as his life falls apart and leads to rehab and ultimately recovery — one that still is a work in progress. LaBeouf’s script appears to be a form of very public therapy, and there is nothing Hollywood loves more than a comeback. This movie, a sensation at Sundance, provides one for its star and writer.

Otis Lort is the fictionalized LaBeouf, and we see him in two distinct periods of his life. Noah Jupe plays him as a young kid, a successful child star of a sitcom who is breadwinner for his family and in constant conflict with a stage father who is an addict, ex-felon and rodeo clown. That father is played in an extraordinary turn by LaBeouf himself, perhaps as a way of reconciling everything in his past relationship with a very difficult and unusual family life. Lucas Hedges, as the older Otis, first is seen working on a big-budget movie that is clearly meant to be a copy of Transformers, one of many films in which LaBeouf himself starred. Hedges’ Otis broods a lot and appears to remind us now and again of the toll stardom can take, and also the inevitable road to rehab.

The real meat of this picture belongs to Jupe as he traverses a relationship with James, a difficult dad to say the least. It is fascinating to watch as the conflicts mount up, but it is clear this is a kid with enormously engaging star power held down by an unconventional family life. The other main character we meet is a neighbor (singer FKA Twigs) in the rundown hotel where Otis lives with his father. She is a sex worker and also someone who has been abused in her past who finds a connection with the boy. It is a respite from Otis’ dealings with his father, who never seems to have his son’s best interests at heart.

All of this is fascinating to watch as LaBeouf clearly is willing to put his life and mistakes on display in an effort to get some kind of closure so he can move forward. He is an extremely talented actor, always has been, and now more than ever in movies like American Honey and The Peanut Butter Falcon, is but here he tops himself in a daring move that few actors would attempt. Playing a version of his own father does not come off as an indulgence at all but rather a relief and a path to understanding — for the star himself and for us. Jupe is just outstanding in every way, and Hedges also excellent, even though he doesn’t have the really interesting scenes to play here. So are FKA Twigs and the lesser-used supporting cast. This is a must-see.

Producers are Har’el, Anita Gou, Brian Kavanaugh-Jones, Daniela Taplin Lundberg, and Chris Leggett. Amazon Studios puts it into limited release Friday. Check out my video review with scenes from the film at the link above.

Do you plan to see Honey Boy? Let us know what you think.