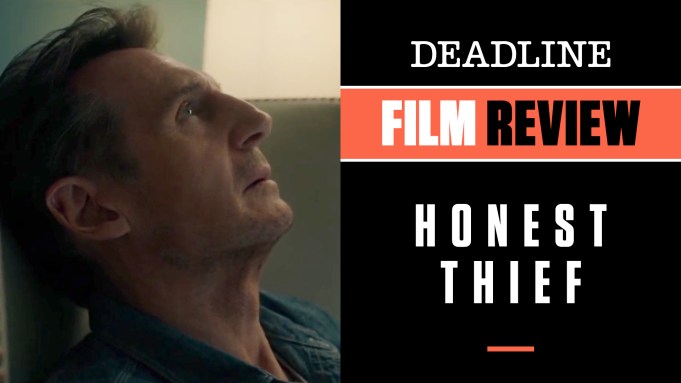 Although he’s not following the Taken formula this time, have no fear because Liam Neeson is delivering exactly what this 60ish action-movie star promises fans when he boards a vehicle like his latest, Honest Thief.

This one from Ozark co-creator Mark Williams, who writes and directs, is a clever spin on the usual Neeson diet of taking out the bad guys who are disrupting his otherwise peaceful existence. He plays Tom Carter aka “the In and Out Bandit,” a bank robber who for a dozen years has flown under the radar in his holdups and amassed $9 million without getting caught. But now he is in love for the first time after meeting Annie (Kate Walsh), who runs the storage-locker business where Tom secretly keeps his cash hidden (unbeknownst to her). He wants to go straight, admit his crimes to the FBI and send them to gather the stolen loot. In other words, he is turning over a brand-new leaf. But things get complicated when the ruthless FBI agents who answer the call decide to take this opportunity to enrich themselves by keeping the money, about $3 million of it, and going after the one person who would know about their crime plus where the rest of the cash is. That, of course, is Tom. Well, as you might imagine if you’ve ever seen a Neeson movie, they are messing with the wrong guy.

Chases, fights, lots of explosions (he’s great at setting these) and dances with death all start happening as this “honest” thief just can’t seem to get out of the game. Chief bad guy, as it turns out, is Agent John Nivens (Jai Courtney), who gets greedy beyond greed and convinces his reluctant family-man partner Ramon (Anthony Ramos) to go along with the scheme, even though the latter worries they could wind up in prison if found out. Things really get complicated when their FBI boss Agent Baker (Robert Patrick) comes into the picture, as well as nice-guy Agent Sean Meyers (Jeffrey Donovan), who gets a lot of cute moments with his constant companion, his dog Tazzie. And though she is clueless about the past of her new love, Annie becomes a victim in all this as well when Nivens and Ramon come calling for the rest of the money they know also is hidden in those storage lockers. She gets beaten to a pulp and left for dead, further enraging Tom, who really goes into action now.

Honest Thief is tailor-made for Neeson, who is such an appealing and empathetic presence that you constantly root for him, despite his criminal past. He is a nice guy who was drawn to the dark side as a way to avenge the wrongs experienced by his father, who was bilked out of his life savings. Tom simply went after the system in return and never knew how to stop. The actor makes this character a winner in his filmography, and the relationship with a well-cast and engaging Walsh works neatly in driving the storyline. Courtney does all the requisite things needed to play the bad cop, and Ramos is likewise fine as a good guy caught up in a very bad scheme. I also really like Donovan, who manages to turn a potentially one-dimensional FBI agent into a unique individual. In a case of pure nepotism, the director has cast his own dog as Tazzie, and the pooch turns out to be a scene-stealer.

If you are looking for escapism these days — and who isn’t? — Honest Thief is a genre picture that delivers pure entertainment, nothing more but fortunately nothing less. Neeson fans won’t be disappointed. The newly rebooted Open Road opens it in theaters (yay!) on Friday. Producers are Craig Chapman, Charlie Dorfman, Tai Duncan, Jonah Loop, Myles Nestel and Williams. Check out my video review with scenes from the movie at the link above.

Do you plan to see Honest Thief? Let us know what you think.