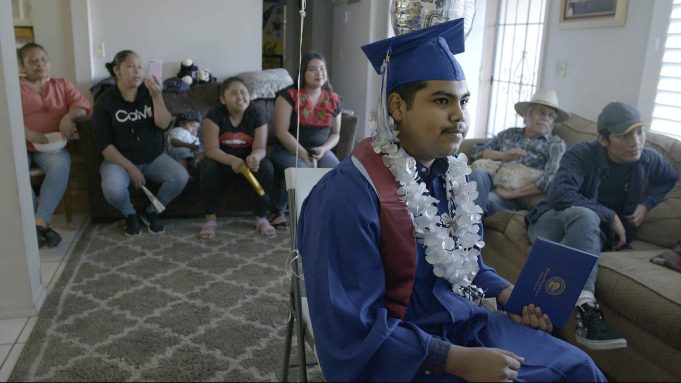 EXCLUSIVE: Here’s a first look at a scene from the Peter Nicks documentary Homeroom, premiering today in U.S. Documentary Competition at the Sundance Film Festival, at 9 AM PST.

Homeroom is the third in a trilogy of films from Nicks examining life and institutions in Oakland, California, including a public hospital in The Waiting Room (2012) and the Oakland Police Department in The Force (2017). Homeroom goes inside Oakland High School where members of the class of 2020 contend with a host of pressures—applying for college, keeping a roof over their heads with gentrification driving up rents, and then coping with virtual learning once Covid shut down schools.

The student body, mostly kids of color, also deals with the constant presence of police officers on campus, who are part of a force operated by the Oakland Unified School District itself. With the district poised to impose budget cuts, some of the students Nicks followed—including two who served as student representatives on the school board—became active in a campaign to abolish the district police force.

In the clip, tensions erupt at a school board meeting to address the issue.

Homeroom is a production of Concordia Studios and Open’hood. Nicks and Sean Havey produced the documentary. Laurene Powell-Jobs and Davis Guggenheim are among the executive producers. It’s an acquisition title at Sundance, with Cinetic and CAA Media Finance handling sales.