Continue to Deadline SKIP AD
You will be redirected back to your article in seconds
Skip to main content
November 1, 2018 4:06pm 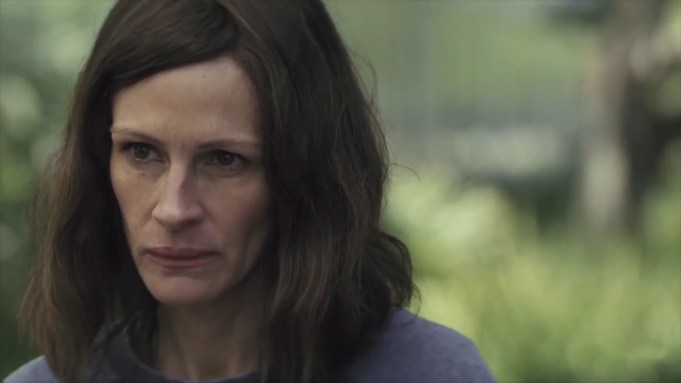 Despite the regularity nowadays in which big screen actors are heading to the small screen, the first TV series starring Julia Roberts still comes with a plethora of expectations. Unfortunately, Amazon’s November 4 premiering Homecoming is an exercise in postmodern pastiche that seems to have forgotten to have much of a story, as I say in my video review above.

Based on the podcast of the same name created by Eli Horowitz and Micah Bloomberg, the first 10-episode season of the two-season pickup series finds Roberts’ as corporately harried and terrible wig wearing caseworker Heidi Bergman at the Homecoming Transitional Support Center, a shifty facility with the pretense of helping frontline soldiers cycle back to civilian life and predictably playing another game. Jumping around from 2018 to a pretty similar 2002, Homecoming has all the different formats, genres, timelines, conspiracies, realities, decades and a bit of a Columbo homage thrown in there that you’d expect from director Sam Esmail.

Yet once you scratch off the mish mash of visual and sonic tricks from the Mr. Robot creator’s bag of tricks, what Homecoming doesn’t deliver is anything new narratively or for the underutilized Oscar winning Erin Brockovich actor – which is a real letdown for her television debut.

Clearly something underhanded is going on at the Homecoming facility and why Roberts’ Bergman finds herself living with her Sissy Spacek portrayed mother and waitressing at dockside seafood joint four years from now. But what that is and what sleight of hand has been played with Roberts’ character’s memory just isn’t that interesting, even when all is somewhat revealed.

And that’s assuming if you haven’t seen four dozen or so conspiracy thrillers before on the big or small screen.

On the upside, Homecoming does have the truly excellently rumbled Defense Department auditor played by Boardwalk Empire vet Shea Whigham and Vinyl alum Bobby Cannavale as Bergman’s very shifty, slippery and slimy corporate boss. They are far far from the most original characters you are going to get, but there is a real bite in Whigham and Cannavale’s performances that the Homecoming scripts almost intentionally deny Roberts. The actor’s obviously deep talent has been left tethered for the most part except for silent stares off into the moral abyss and her own vague future and past, which is near impossible to sustain.

Like an increasing number of shows in the past year, the Stephan James and Dermot Mulroney co-starring Homecoming reveals how important a strict edit can be, even as the episodes here clock in at around 30 minutes long.

Take a look at my Homecoming review above for more of my take on the series that launches tomorrow on Jeff Bezos’ streaming service.