Continue to Deadline SKIP AD
You will be redirected back to your article in seconds
Skip to main content
March 18, 2020 2:57pm
4Comments 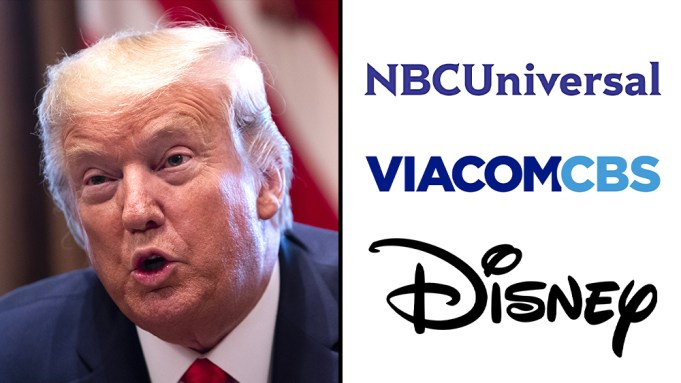 Donald Trump may have initially been slow to comprehend the scope of the novel coronavirus, but the formerly Celebrity Apprentice host hasn’t ever been lacking when it comes to showmanship and getting his message out there. Now Trump has some big media buddies in his PR tent to stop further fallout from COVID-19.

Following weeks of missteps and misinformation from the top down, the White House just now announced a “major partnership” with NBCUniversal, the Walt Disney Company, iHeartMedia and ViacomCBS to “effectively communicate accurate and timely information directly to the American people” on a multitude of platforms.

No word when this Ad Council overseen PR campaign will roll out, but you can take a gander at the first PSA above.

Additionally, the non-profit public info organization has also prepped some graphics, like the one to the left, for outlets and others to promote on social media ASAP.

There aren’t enough COVID-19 tests out there for any one major city, let along the whole country, but the latest action by Team Trump in these fast moving times comes a day after MTV, Comedy Central and other brands from the Bob Bakish-run ViacomCBS proclaimed a campaign to raise awareness about the importance of social distancing.

Playing to their strengths, the White House press office says that “First Lady of the United States Melania Trump, Surgeon General Jerome M. Adams, Dr. Anthony Fauci, Dr. Deborah Birx, and other Administration officials will appear in national broadcast PSAs that communicate the most important ways Americans can protect themselves and those most at risk.” No mention if POTUS himself or VP Mike Pence will be appearing in any of the spots.

In terms of those spots, here’s what the administration says the deal is:

There are currently over 7500 case of the coronavirus in an increasingly shutting down USA and over 105 deaths as of today. With a patchwork of recommendations and enforcements across the 50 states to keep people from gathering in large groups and millions staying in their homes, the PSA plan certainly recognizes that people are watching a lot of the small screen — maybe a streaming component is coming soon too.

In the meantime, looking at the first PSA that was just released, POTUS and the media goliaths might just want to ask former R.E.M. frontman Michael Stripe if he could give them some pointers –