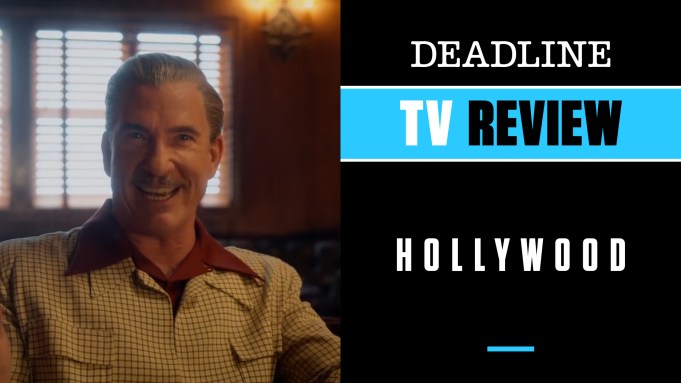 Hooray for Hollywood, kind of. Launching on May 1 on Netflix, the Ryan Murphy- and Ian Brennan-conceived Hollywood is an ambitious love letter of sorts to the town and our better angels. However, pulling out a lot of the Feud boss’ tried and now tired tricks, the lush seven-episode limited series about Tinseltown’s post-WWII Golden Age weaves in and out literally and figuratively through fact and fiction. The results are mixed, as I say in my video review above.

Wrapped in a scrumptious rich production design by Matthew Flood Ferguson, Hollywood does, like the town itself, have a slippery tendency to skim on the surface of the old dirt pile when it thinks it is making a deep dive. It’s not a fatal flaw, but the series executive produced by Janet Mook does lose the plot more than a few times as its gang of outsiders diligently work against all odds to put on a show and flip the 1940s script on racial, class and gender barriers.

For all that, this Hollywood is much more a fantasy than alternative or revisionist history.

The first project in Murphy’s $300 million deal with Netflix, Hollywood obviously has a big spotlight on it. But, within the narrative, the real show in this case is a little picture called Meg that serves as the little engine that could, kind of.

Meg is directed by proudly half Asian Raymond Ainsley (Darren Crisis), penned by Rock Hudson’s fictional boyfriend Archie Coleman (Jeremy Pope), and stars Camille Washington (Spider-Man Homecoming’s Laura Harrier). This film within Hollywood is determined to step on every landmine of a closeted, discriminating and casting-couch-centric town with a seedy underbelly. Yet, with a particular Glee-like sheen, it oddly lacks grit, as much as it abounds in sex and inclusiveness.

Packed with name drops like Joe Kennedy and cameos by Eleanor Roosevelt (Harriet Harris) and Vivian Leigh (Kate McGuinness), this minor saga about barrier-breaking make-believe in the town that makes make-believe is in doses inspiring, retrospectively aspirational, and redemptive. It is also, despite its best intentions, occasionally annoying for being both overtly insular and shockingly naïve at turns.

Ultimately, with all that star power, Hollywood is worth checking out this weekend for all of its love of Tinseltown lore and wish fulfillment in action. However, I wish Murphy and gang had let their hotpot of a story breathe more. Just taking a beat or two and rubbing the stardust from their eyes may have truly given Hollywood the marquee treatment it deserves.