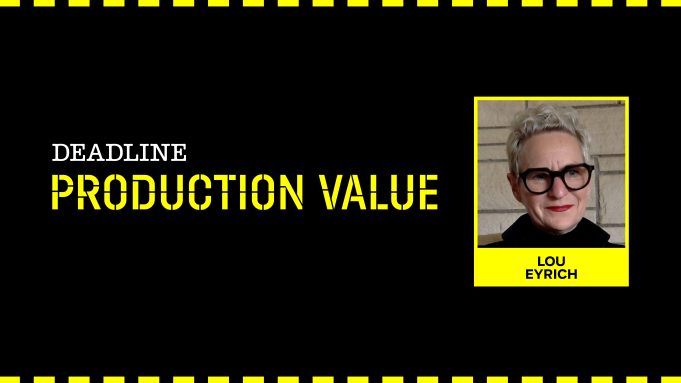 A five-time Emmy winner, who was awarded a Career Achievement Award in Television in 2012, Lou Eyrich’s career as a costume designer was not something she imagined for herself at an early age.

“It just kind of came to me,” Eyrich notes, in the latest installment of Deadline’s Production Value video series. “[Costume design] wasn’t something that I ever even knew existed.”

Growing up in small-town Minnesota, Eyrich’s professional trajectory began during college, when she was working part time at a vintage store to pay her tuition. “My boyfriend at the time did lighting at bars, and for bands and things. So, I would go on the road with him,” she says. ”Touring with The Manhattan Transfer, I set up the dressing rooms, and ironed their clothes, and took care of them backstage and such.”

When Eyrich got back to Minnesota, she learned that the costume designer for Prince needed assistance on the 1990 film Graffiti Bridge. “I had no idea what I was doing. I had some safety pins, and a lint roller, and she just pushed me out there, and it was great,” she explains. “So then, I ended up on the road with Prince for a couple of years, until I decided that being on the road wasn’t the healthiest place for me.”

Subsequently, a Los Angeles-based movie came to Minneapolis, and Eyrich begged the costume designer to hire her. “I said I would size shoes, or restock racks, whatever it took. I moved to LA and ended up as her assistant for six or eight years,” the costume designer says. “Her name’s Carol Ramsey. She’s a phenomenal costume designer and my mentor, and I owe my career to her.”

While working with Ramsey, Eyrich found that there was an endless amount to learn. “She could illustrate, and she could sew, and drape, and because she had patience, and she was a very compassionate designer, and she loved what she did, everything she did on a daily basis came from this passion, and it was contagious,” Eyrich says. “She really dug into the research, and that, I think she instilled in me the most.”

Eventually, Eyrich would connect with prolific writer, director and producer Ryan Murphy, on the 1999 TV series Popular, finding at this time someone she would work with for the rest of her career. “I remember meeting Ryan and being very struck by how precise he was. I just remember thinking, ‘Who is this guy?’” she recalls. “He was so prolific, and spot-on.”

Designing endless films and television series for Murphy over the last 20 years, from Nip/Tuck to Glee to American Horror Story, Eyrich would soon become one of the creator’s most trusted collaborators, taking on a producorial role on his series, beginning in 2018. For Eyrich, this has meant overseeing the overall sartorial vision of each new project, while bringing up-and-coming designers into the mix.

“The original idea was to take assistant designers who had been with us for many years on different shows, and elevate them to co-designer, because it’s hard, as an assistant designer, to get your own show. Because every time you interview, you don’t have enough experience,” Eyrich says. “So, we thought it was a good way to give them a foot up, and get to design under our guidance. And it was working great until all the assistants were now designers, and I ran out of assistants that were ready to be elevated.”

One of Eyrich’s most recent collaborations with Murphy, Netflix comedy The Politician was co-designed by Claire Parkinson. Starring Ben Platt, the series centers on Payton Hobart, a Santa Barbara native who has known since age seven that he’s going to be President of the United States, doing everything he can to get there.

“For The Politician, the main reference Ryan gave was the overall vibe—like a ’70s, influenced California, wealthy family, with old money, Montecito,” Eyrich says. “Payton’s character was like a young JFK, Robert Redford.”

On this series, one of Eyrich’s main points of focus was Georgina Hobart, the matriarch character played by Gwyneth Paltrow. “Ryan wanted her very eccentric, and colorful, and always dressed to the nines, no matter what,” she says, “like, painting out on her poolside deck in a silk, bright-green kaftan, loaded down [with] huge rings and a full face of makeup.”

Another of Murphy’s recent efforts, Hollywood centers on a group of aspiring actors and filmmakers, who will do everything in their power to make it in post-World War II Tinseltown.

On this drama, Eyrich helped to define the looks for aspiring actor Jack (David Corenswet), his wife Henrietta (Maude Apatow), and the wealthy executives who wind up in their sphere. “Jack and Henrietta have no money, so their clothes are a little worn, and they repeat their costumes a lot, and they have this optimism about them,” Eyrich explains, “versus the powerful studio execs and their wives, or their girlfriends, who are wearing expensive silk dresses, and everything’s tailored. The men have cashmere suits, and everything’s custom-made.

“So, you show the juxtaposition of the haves and the have-nots,” the costume designer adds, “but how they all have their dream of being somebody.”

For Eyrich, one of the biggest challenges of this series was crafting its period looks. “The tricky part with Hollywood was, there were five other shows, in Los Angeles alone, shooting ’30s to ’40s to early ’50s, at the same time we were. So, all the costume houses—which in Los Angeles, we rely on heavily—and the fabric stores were all shopping and pulling at the same time,” she explains. “The stock was really thin, so you did have to get really creative. We had a fabulous couple of tailors, so we were able to do a lot of made-to-order in Hollywood.”

In the costume designer’s experience, this kind of challenge with her craft is one that comes up a lot. “Unless you have time to make everything, or close to everything, you are pretty much shopping at the same stores as every other [of the] 600 shows on television right now, and movies. It’s hard to keep coming up with fresh looks when you’re all pulling from the same department stores and online stores, but that also makes it a fun challenge,” she says. “Like, how can I take this dress that everybody else has just bought and make it look unique?”

Reflecting back on her years with Murphy, Eyrich feels incredibly blessed. “Ryan has built this community, with Ryan Murphy Television. Ryan and I have worked together for going on 21 years, but there’s many others—[executive producer] Alexis Martin Woodall, and [producer] Eryn Krueger Mekash, and a bunch of us—who have been around at least a dozen years. Then, all the actors, everybody coming back, and in and out,” she notes. “It’s really special.”

At the end of the day, the best part of the job of the costume designer is gathering with a large group of creative people to tell a story everyone is passionate about. “I love walking onto a set and seeing all the different departments, and we’re all there for the same reason—to make a great show, or a great movie,” Eyrich says. “The days that are really hard and I’m like, ‘Ugh, I can’t do this anymore,’ I can’t imagine being anywhere else. I can’t imagine doing anything else. So, I just get a good night’s sleep, and go right back out there.”

To take a look at our conversation with the lead costume designer behind Hollywood and The Politician, click on the video above.