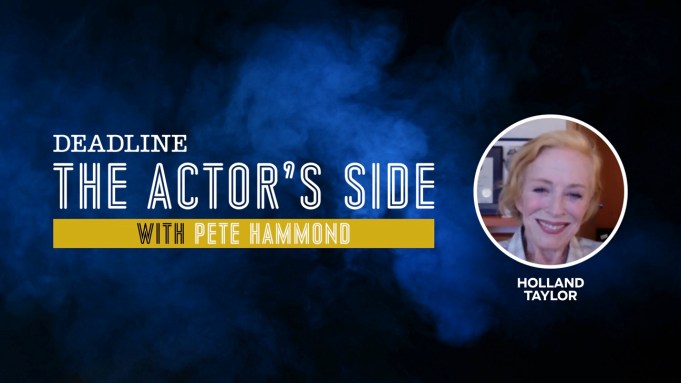 When you look at Holland Taylor’s career, and the variety of roles she has taken on, you have to be in awe — as I was when I interviewed her for this week’s episode of my Deadline video series The Actor’s Side. The occasion is her eighth Emmy nomination, this time for her heartbreakingly good turn as Ellen Kincaid, the studio executive in Ryan Murphy’s Hollywood, a role showing the rare strong female voice in the studio system of the 1940s but also a woman fighting personal loneliness and looking for love as well.

If you want to see what brilliant acting is, just watch the clip we show here as she tries to move the close working relationship with Joe Mantello’s studio exec to a very different level. It’s poignant, touching and true, and both actors are magnificent in these roles (it’s a crime Mantell missed a nomination).

Taylor is up for Outstanding Supporting Actress in a Limited Series or Movie, but actually won the Emmy her first time out as the memorable Judge Roberta Kittleson in The Practice. Among her other nominations were four for her role as Evelyn Harper, the mother in Two and a Half Men, a series she says she still can’t believe how much Chuck Lorre was able to get past the censors, and that now runs endlessly during family viewing hours as a certified smash in syndication.

She can also be seen these days on PBS, which is running the stage production she did on Broadway on Texas Gov. Ann Richards. It is a stirring one-woman play that she also wrote, and it earned her a Tony nomination in one of her frequent returns to the theater where she really made her mark earlier in her career.

In the edited version of our interview (watch it above) we mostly talk about Hollywood, but I urge you to click the link below to see the whole uncut half-hour conversation as we cover the waterfront of Taylor’s career and talk about that play, Ann, plus other highlights including Two and a Half Men, a brief but unforgettable scene in last year’s Bombshell, her early sitcom with Tom Hanks called Bosom Buddies, The Practice and her latest screen role as The Great Leader in Bill & Ted Face the Music. You can’t get much more versatile than Holland Taylor.