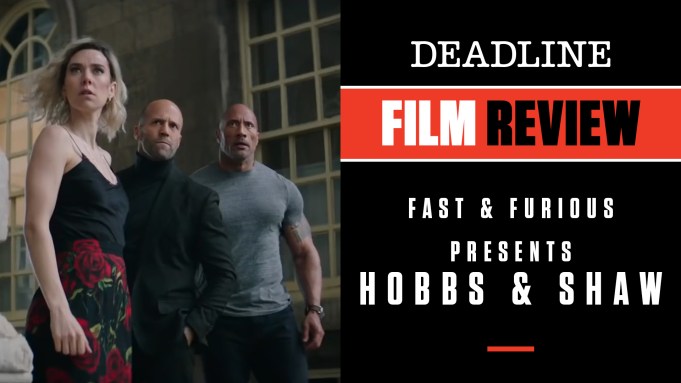 If it is known for anything, the Fast & Furious franchise has always been state-of-the-art in terms of stunt work, and now with a detour to a spinoff featuring the characters played by Dwayne Johnson as Luke Hobbs and Jason Statham as Deckard Shaw, that is more true than ever.

The lumberingly titled Fast & Furious Presents: Hobbs & Shaw actually seems to follow the structure of a classic movie musical. The story stops every 10 minutes or so for its stars to punch out a song, except in this instance the story (such as it is) stops every 10 minutes so our stars can punch out, well, just about everyone. It is soooooooo over-the-top nonsense, and yet despite coming on the heels of recent lesser “Rocks” like Skyscraper and Rampage, it still somehow manages to be a lot of fun for fans of this sort of thing. Just don’t expect anything resembling real life, or even the stunt-laden Mission: Impossible movies, which at least try to present credible human beings doing the action.

Actually, this is as much a comedy as it is a summer action flick, throwing out plot development for quippy insult scenes between its stars that resemble a modern-day Abbott and Costello teaming. These riffs make “Yo Mama” jokes look like the stuff of Noel Coward. (Sorry for the arcane reference; if you have gotten this far in your interest in this movie I am sure you wouldn’t understand the comparison anyway.)

The action pair of Johnson and Statham joined the Fast & Furious franchise about halfway in, and helped steer the franchise off the freeway and into more traditional action-driven material. Hobbs & Shaw requires no previous knowledge of the series or the characters. You get immediately they are the Odd Couple run amok, disliking each other but drawn together for the sake of saving the world, which one of them says he has done at least four times. In this case they must fight the half-human, half-cyborg creation known as Brixton Lorr, or ‘Black Superman,” played with relish by the great Idris Elba. He is determined to get hold of the lethal “Snowflake Virus” which will have the ultimate effect of killing off much of the planet so humanity can merge into beings more like him. Turns out the virus has been ingested by MI6 operative Hattie ( a terrific Vanessa Kirby), who knows it is the only way of keeping it out of the hands of the bad guys. She also happens to be Shaw’s sister, and so they all team up to stop the madness and kick some major ass.

Whether sliding down glass office buildings in new ways he didn’t do in Skyscraper, or leading a spectacular cliffside chase (in Kauai, which  doubles for Johnson’s Samoa) in which his truck and caravan are tied to a hovering helicopter, Johnson is at home in the spectacular stunt business to be sure. Careerwise, like Tom Cruise on a much lesser scale, he has put himself into a corner though by always having to top what he has done before. In that way, Hobbs & Shaw fills the bill. There are some great action sequences, especially in the closing Samoa-set scenes, and all are expertly delivered by director David Leitch who knows his way around this kind of thing having done Deadpool 2 and Atomic Blonde. Writers Chris Morgan and Drew Pearce know exactly what is required here as well — find something for the actors to say until we get to the next big set piece. This is the kind of movie critics used to regularly define as “the thrill ride of the summer.” If that floats your boat, stand in line.

Both Johnson and Statham are clearly aware of what they are doing, and they do it well, as does Elba and especially Kirby, who actually tries to bring some credibility to her role. Helen Mirren is in it too for a brief bit near the beginning, and there are a couple of superstar cameos thrown in to increase the laughs quotient — they get them, too. Stay all the way through the end credits of this over two-hour extravaganza, because clearly not everything could be squeezed into the actual movie. The post credits scenes take things just a bit too far if you ask me, but no one thought to do that. Oh well.

Johnson, Statham and Morgan produced along with Hiram Garcia. Universal sends it out in Thursday night previews before its big Friday opening. Check out my video review above with scenes from this thing.

Do you plan to see Hobbs & Shaw? Let us know what you think.