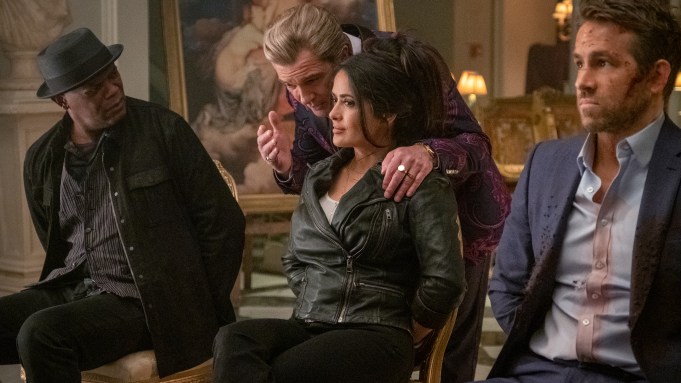 Lionsgate has released the trailer for The Hitman’s Wife’s Bodyguard, the action comedy that returns the team of Ryan Reynolds, Samuel L. Jackson, Salma Hayek, director Patrick Hugues and screenwriter Tom O’Conner for a second go-round after 2017’s successful The Hitman’s Bodyguard.

Like others delayed by the pandemic, the pic now is prepping for its U.S. theatrical release, set for June 16. It most recently had been set to hit screens August 20 but moved after another Reynolds movie, 20th Century Studios’ own oft-delayed Free Guy, shifted its date to August 13.

The Lionsgate and Millennium Media sequel picks up after the events of the first movie and finds bodyguard Michael Bryce (Reynolds) trying to recover from those events and recharge — call it a psychological sabbatical. But he literally is pulled back into action by his old friend/foe Darius’ (Jackson) even more volatile wife, the infamous international con artist Sonia Kincaid (Hayek), who need Bryce’s help saving her husband. They get in over their heads in a global plot and soon find that they are all that stand between Europe and a vengeful madman (Antonio Banderas).