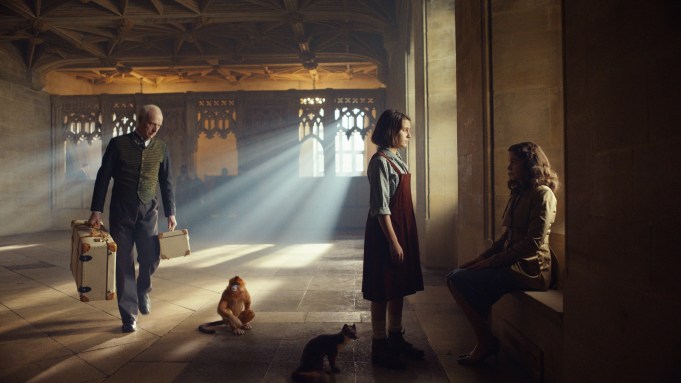 The series, starring Dafne Keen, Ruth Wilson, Amir Wilson, Ariyon Bakare, Andrew Scott, Will Keen, Ruta Gedmintas and Lin-Manuel Miranda, is set to return to HBO on Nov. 16. The trailer kicks off where the first season left off – the beginning of a new world.

“Something happened in this world,” Keen’s Lyra tells her companion Will Parry (Amir Wilson) “There’s something important that connects us to this place.”

As Lyra and Will explore the unknown world before them, the powerful witches and figures of the Magisterium discuss how they can protect the powerful girl or restrict her power. Witches believe Lyra can bring peace, while the Magisterium thinks the former can wreak havoc.

While the Magisterium and witches are hoping to cross paths with Lyra and Will, they’re not the only ones. The teaser sees Miranda’s Lee Scoresby team with Scott’s mysterious Colonel John Parry to chase down Lyra. The two make for an unlikely, but adventurous duo, traveling from world to world to find the girl who witches claim is the key to peace.

“The child will bring the end of the Great War. It’s time to unite and destroy the Magisterium,” says a witch.

The teaser shares glimpses of new worlds, from Lyra and Will’s quaint town to the eerie woods members of the Magisterium traverse on their journey. The trailer also teases combat scenes between all kinds of entities in the His Dark Materials realm, from animals to spirits to humans.

“The greatest war that ever was is coming,” warns a Magisterium leader.

Season two of His Dark Materials comes to HBO on Nov. 16.