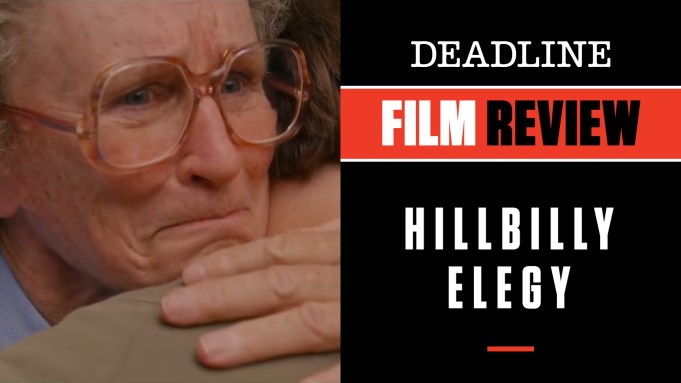 On its surface J.D. Vance’s bestselling 2016 book Hillbilly Elegy: A Memoir of a Family and Culture in Crisis, detailing life with his Kentucky-bred Appalachian family and his own maturation in Middletown, Ohio, would not seem to be the easiest thing to adapt for the screen, especially with all the social and the political aspects Vance colors it with. Director Ron Howard and his screenwriter Vanessa Taylor (The Shape of Water) don’t abandon those shadings. But they are far more interested in the human aspects of the story of a young man growing up with an opioid-addicted mother and a stern earthy grandmother while trying to escape his family roots and find his own way in life once he gets to join the Marines and then go to Yale.

The polemics of the book are there but weaved in much less blatantly as Howard’s take does what all the best movies do: focusing first and foremost on the humanity of the characters, flaws and all. The director, who has dealt only a few times with family themes before, really has a handle on how to get inside this one. Fans of the book, as well as those who have not read it, will see a film that cuts right to the heart of what makes family such an integral and inescapable part of our lives. This movie, while very much about Vance, will likely strike a chord well beyond his personal story.

Using a smart, non-linear approach, the movie darts back and forth between two distinct life-altering periods in J.D.’s life. There is the young impressionable 14-year-old J.D. (Owen Asztalos) dominated by a mother who couldn’t help herself, and the adult (Gabriel Basso) struggling to find himself but drawn back to a world he finds he can’t quite quit when that mother becomes very ill.

Hillbilly Elegy doesn’t shy from J.D.’s harrowing upbringing dealing with a parent, Beverly (Amy Adams), who has let her addictions get the better of her, often at the expense of J.D. Fortunately he has his Mamaw (Glenn Close), a towering figure in his life. She is there to set him straight — even if she is sometimes smoking two cigarettes at a time while doing so. This tough, take-no-prisoners woman is no saint but she is the life force though who becomes a savior of sorts with her own brand of loving. But it’s tough love. Vance goes on to Yale Law School, far from the family trauma in Ohio, but because of his mother’s worsening condition is forced back into the fold. Even as he makes strides to break away, the memory of his Mamaw unmistakably still there.

Ron Howard On Filming ‘Hillbilly Elegy’: “I Thought Of It As An Emotional Epic”; Interview With The Director And Co-Star Glenn Close

For J. D. Vance, it was always the “culture” part, the Appalachian roots that lingered, that Kentucky code he couldn’t completely separate himself from even after he made Southern Ohio his home. What the film does so well is to make this universal: Despite a dysfunctional family history, at times very rough, he still finds a way towards hope over despair, eventually a way out on his own terms, overcoming adversity and hardship towards a happier ending.

The cast could not be better. Adams takes an essentially unlikable character and gives her a bit of color. It’s a tough role and Adams brilliantly brings it home, managing some barn-burning scenes but never going over the top.

Close is just magnificent here, physically and emotionally ripping into Mamaw and delivering another unforgettable character in a career that has been full of them. I particularly was impressed by the way she seems to inhabit this unique woman to the point you would swear the real Mamaw was back playing herself.

Both Basso and Asztalos are a perfect fit as the two versions of J.D., the latter particularly wrenching in some highly emotional moments. Freida Pinto is warm and just right as Usha, the older J.D.’s girlfriend, while Haley Bennett is excellent as his sister Lindsay. I wish there was more of Bo Hopkins as patriarch Papaw but what we have is choice.

The production values here, as you might expect from a Howard film, are first-rate.

Brian Grazer and Karen Lunder join Howard as producer. Netflix will release it in theatres on Thursday, and begin streaming it on November 24, just in time for Thanksgiving. I can’t think of better timing for this heart-wrenching and deeply affecting story of family.

Check out my video review above with scenes from the film. Do you plan to see Hillbilly Elegy? Let us know what you think.