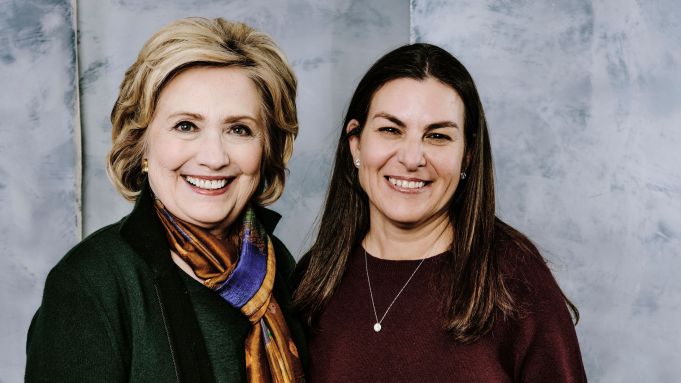 With the January 25th world premiere of the Hillary docuseries on her life, Hillary Clinton has been a frequent presence in Park City during the opening days of the 2020 Sundance Film Festival.

As you can see in the video above, the former Secretary of State has also been very blunt about Donald Trump, the stakes of the 2020 election, the threats facing the country she sought to lead and what’s next.

“I made the decision that I was moving on with my life, and this is part of moving on, this kind of retrospective,” Clinton told me during her visit to Deadline’s Sundance Studio with Hillary director Nanette Burstein. “But I have not moved on from caring about my country, I haven’t moved on from believing that Donald Trump and his enablers are doing terrible things to America and the world,” the ex-New York Senator added. “So, I’m not going anywhere.”

“I’m going to be speaking out and making as much noise as I can to illustrate what the stakes are,” the 2016 popular vote winner Clinton declared of the upcoming 2020 election and her fellow Democrats’ efforts to unseat the ex-Celebrity Apprentice host from the White House.

“The 2016 election has all kinds of implications for the 2020 election,” Hillary Clinton says, as Trump faces the continuing Impeachment trial in the Senate and the Iowa caucuses cast the first votes in the Democratic primaries on February 3.

For a director, you’d presume that tackling the well documented life of a woman who has been a public figure in American life for nearly 50 years would be a creative cul-de-sac, but Burstein insists it was the very much the opposite. “There is a lot of wonderful opportunity to just play out what you as a filmmaker think is the best thing for this story,” The Kid Stays In The Picture helmer told me of Hillary, the vast footage available, the 35 hours of interviews she conducted with Clinton and the shifts in time and space in the Hulu show.

And if you didn’t get up to Park City for Sundance this year, you are not out of luck when it comes to seeing Hillary. Though unveiled for the first time ever at its full 253-minute length two days ago at SFF’s Ray Theatre, the up-close and sweeping four-part Propagate-produced docuseries will launch on the Disney-controlled streamer on March 6.

For more from my conversation with Clinton and Hillary director Burstein, click on the video above.