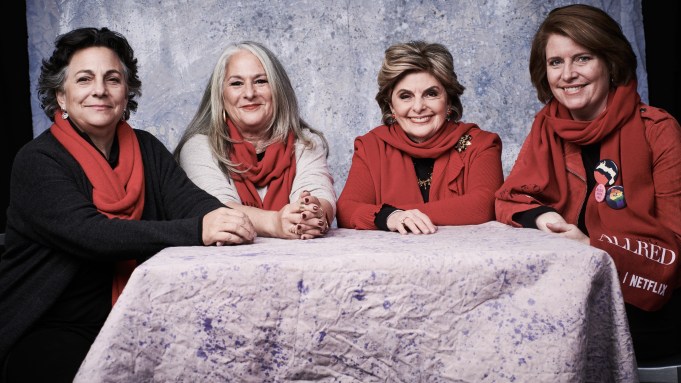 “They can break our hearts but they can not break our spirit,” declares Gloria Allred of the defeat of Hillary Clinton in the 2016 election and the continuing fight to break that glass ceiling and for civil rights in America. “That was shocking to millions of people, probably billions around the world,” the instigative attorney and subject of the Sundance Film Festival competition documentary Seeing Allred added.

“We’re going to have to pick ourselves up, take another breath and become very activist in support of women’s rights, in support of our country, in support of our democracy, in support of truth and we need to take action,” Allred said at the Robert Redford founded festival this week, as you can see in my video interview with her, docu directors Roberta Grossman and Sophie Sartain plus the film’s executive producer and Grace and Frankie co-creator Marta Kauffman.

Filmed over three years and buffeted by events such as the election of Donald Trump, the up-close and personal Seeing Allred is amazingly right there with the lawyer and big-time HRC supporter as she watches the Democrat go down to defeat on live TV in November 2016. Seeing Allred is scheduled to debut on Netflix next month.

Always in motion, Allred had five screenings of the film during Sundance, including one today. She also spoke at the Respect Rally on January 20, canvassed the assembled media in Park City and continued to work for her clients against Bill Cosby, Harvey Weinstein, Trump and more, including recently Walmart in a discrimination action.

Click on my chat with Allred, Kauffman, Grossman, and Sartain above for more.

With its Awards ceremony tonight, which Seeing Allred is a competitor in the U.S. Documentary category, Sundance 2018 wraps up tomorrow.