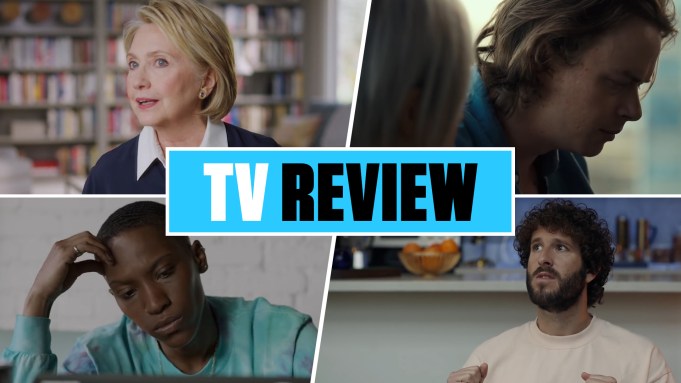 As the fallout continues from the Super Tuesday brawl between Sen. Bernie Sanders and ex-Vice-President Joe Biden last night and the declaration of a state of emergency in Los Angeles today over the coronavirus, finding something good to sit down and watch on TV might just be what the doctor ordered.

Specifically, the prescription is for the show you have to watch – as you can see in the video review above.

Among such choices, the only way to see who gets my vote is to watch the review.

Having premiered at the Sundance Film Festival earlier this year, the 253-minute long Hillary takes both a meta and mega perspective on the long public life and private thoughts of the former Secretary of State and 2016 Presidential candidate. Helmed by The Kid Stays in the Picture co-director Nanette Burstein, all four episodes of the Propagate-produced Clinton docuseries drop simultaneously on Friday.

Born out of a partnership between the House of Bezos, Sky, and Canal+, the fluid narrative eight-episode series tracks a shipment of 5,000 kilos of cocaine and the coordinating and competing agendas at play in the big money move. Produced by Cattleya and Bartlebyfilm and having premiered out of competition at the Venice Film Festival last year, ZeroZeroZero is based on the relentless 2013 novel by Gomorrah scribe Roberto Saviano.

Pulling back the curtain on both Hollywood and that difficult decade between adolescence and true adulthood, Twenties makes its debut tonight on the ViacomCBS-owned BET. Created by Emmy winner Waithe and co-showrun with Susan Fales-Hills, the eight-episode Twenties follows a trio of friends, played by newcomer Jonica T. Gibbs, Christina Elmore and Gabrielle Graham, as they try to navigate the pitfalls and sudden surges of the entertainment industry, their dreams and their self-sabotaging.

If you were a fan of Lil Dicky’s 2013 breakout hit “Ex-Boyfriend,” FXX’s Dave might be right up your comedy ally. Starring Lil Dicky himself AKA Dave Burd, this Kevin Hart produced and Jeff Schaffer co-created, the pseudo autobiographical series also features Dicky’s real-life hype man GaTa in a role that’s very close to real life. I Feel Bad vet Taylor Misiak stars in the profile of one man’s pursuit of hip hop greatness and other issues big and small, with Andrew Santino, Travis Bennett and Christine Ko in the cast too.

So, with all that on offer, which one is the show you have to watch? You’ll have to watch my review to find out.