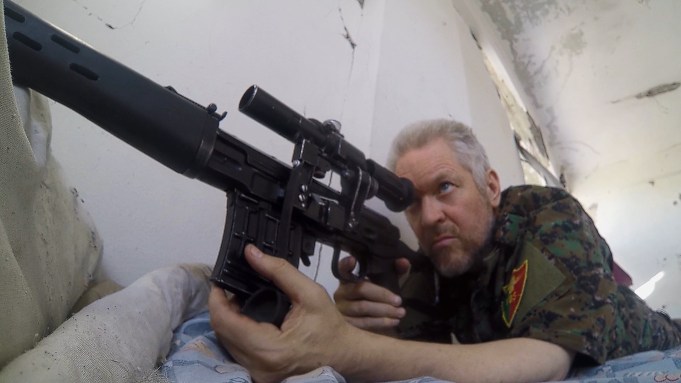 EXCLUSIVE: Here’s your first trailer for Heval, Curiosity Stream’s first original feature, about British-born actor Michael Enright who volunteered for the fight against ISIS in Syria.

Set to launch on September 23rd from Emmy Award-winner Adam R. Wood, the film will explore the two sides to the Enright story. Some thought he was a selfless hero battling America’s most insidious enemy; others saw him as a hot-tempered narcissist, staging a publicity stunt to further his career. Either way, when his ‘service’ ended, neither the UK nor the U.S. welcomed him back.
The doc includes interviews with the actor, his supporters, his detractors, and foreign affairs experts, as well as the actor’s own never-before-seen helmet-cam video of deadly battles with and interrogations of ISIS fighters.

Today, Enright is struggling to negotiate his way back into his adopted homeland of the United States. Several U.S. officials have come to his defence but global support is waning and Enright’s future is uncertain.

Enright, who previously had small roles in films including Knight And Day and series such as Agents Of S.H.I.E.L.D. and CSI, has been the subject of multiple international profiles, including one in The Washington Post by Manuel Roig-Franzia, which confirmed his participation in the Syrian conflict.