Continue to Deadline SKIP AD
You will be redirected back to your article in seconds
Skip to main content
April 22, 2021 9:05am 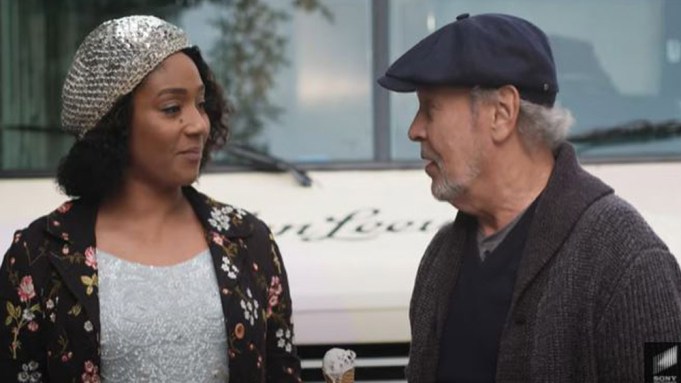 Charlie Burnz is a veteran comedy writer with family issues. Emma Payge is a singer whose ex is a fan of Charlie, so he bid on lunch with him at a charity auction. Winning bid: 22 bucks. But she goes instead, and one awkward allergic reaction later, an unlikely friendship is born.

When Charlie’s analyst asks them later, “Do you mind if I ask what your relationship is?” they both shake their heads and mutter, “I don’t know.”

“This woman is full of surprises,” Charlie says at one point.

Here is the first trailer for Here Today, starring Billy Crystal and Tiffany Haddish as the new pals who kicks the generation gap aside and redefine the meaning of love and trust. Eyeball the trailer above and the new key art below.

Key lines from Charlie to Emma: “I wanna have fun, I wanna laugh, I wanna not be scared, and I wanna write the book — and I wanna do all of that with you.”

Penn Badgley, Laura Benanti, Anna Deavere Smith, Louisa Krause and Nyambi Nyambi co-star. Crystal also directed Here Today from a script he wrote with his 700 Sundays collaborator and fellow SNL veteran Alan Zweibel, who wrote the short story on which the movie is based.

Sony Pictures Worldwide Acquisitions’ Stage 6 acquired the Astute Films pic last week and will open it in theaters May 7.