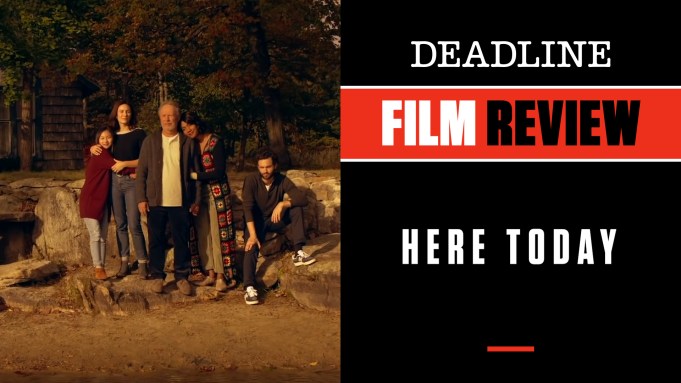 Right on the heels of Anthony Hopkins’ Best Actor Oscar win for playing an elderly man slipping deeper into dementia in The Father comes another movie with another veteran star in a very different but similarly affecting approach to the same subject. Although Billy Crystal’s greatest success in movies has come from such comedy classics as When Harry Met Sally, City Slickers, Analyze This and its sequel,and many more, he has shown a penchant for dramatic talent as well in movies like Mr. Saturday Night, just not as often.

With Here Today, he has co-written a script (with SNL veteran Alan Zweibel), directed (for the first time since HBO’s 61* 20 years ago) and stars in a film that allows him to be very funny but also goes for raw emotions as a successful comedy writer who finds himself on the precipice of dementia. The core of the movie, though, explores the unlikely friendship he strikes up with a younger woman, an aspiring singer he “meets cute” — as they say in the trade — but who proves to be just the perfect relationship at this point later in his life. That woman is Emma Payge (Tiffany Haddish), who wins an auction (for $22) to have lunch with a legendary writer Charlie Burnz (Crystal), but she really has no idea who he is.

The film starts broadly as that lunch turns into an unmitigated disaster when an extreme allergic reaction to some shellfish sends her to the emergency room. Uninsured, she is helped out by Burnz, who not only accompanies her but pays the bills and then agrees to give her a needed shot once she gets home. As they say in Casablanca, it is the beginning of a beautiful friendship, platonic but deep, and coming along just as Charlie realizes he has moments where he can’t even remember his own kids’ names, using Post-It notes as a crutch. A Q&A he participates in for a movie he wrote 30 years earlier finds him unable to name co-stars Sharon Stone and Kevin Kline, along with director Barry Levinson (all in brief cameos), but the audience just thinks it is a joke to get laughs, not what the real truth actually is. We know, however, and watching Crystal play this moment is devastating.

The initial inspiration for the film came from a real-life incident that Zweibel turned into a short story. He had lunch with a fan who won it in an auction as a real bargain and then had that allergic reaction. He and Crystal took it from there, expanding it with the poignant circumstance of a very successful Emmy- and Tony-winning writer dealing with a life crisis while trying to keep it all together and keep it secret. He works as a senior writer now at an SNL-like show, still very capable of crafting comic gems and serving as a mentor to the show’s younger writers, even with moments where he’s not his old self.

These scenes set at the show are dead-on and authentic as you might expect coming from the pen of Zweibel and one-time SNL castmember Crystal, particularly a meltdown in the middle of a live broadcast where Charlie goes directly at the actor doing the “Weekend Update”-style bit, breaking in and chastising him for his pronunciation of words in the script. Hilarious yet harrowing, it goes viral, and the live audience and staff are ecstatic until Charlie reveals it was no joke, just another moment of a man losing control of himself. Crystal brilliantly, brilliantly plays this scene, one of his best moments ever onscreen and part of a performance that doesn’t miss a beat. He manages to navigate with humor and heartbreak just what is happening to this man in real time.

Haddish also has several key scenes including taking over a bat mitzvah she attends as a guest of Charlie’s, where she livens things up with a rousing rendition of “Piece of My Heart.” Haddish expertly blends precise comic timing with empathy, humanity and perfect chemistry with Crystal. This is her best screen outing since her breakthrough in Girls Trip.

A fine supporting cast is well used here with Penn Badgley and Laura Benanti as Charlie’s grown kids who aren’t quite aware what is happening to their father and wonder how this stranger has invaded his life; Anna Deveare Smith as the compassionate doctor walking Charlie through it all; Andrew Durand as a fledgling comedy writer given sage advice by this show business veteran; and Louisa Krause in uniquely shot flashbacks as Charlie’s late wife.

But ultimately Here Today belongs to its two stars, both never better. For Crystal, it is an encouraging direction in his screen career, turning to independent films like last year’s fine supporting work in Standing Up, Falling Down and now this full-blown lead role in a movie in which he is the creative force in front of the camera and behind it. It is also the kind of movie, far too rare these days, that will provide a heartwarming and entertaining time at the movies — collectively seen by an audience together in a theater. That is how Sony is opening it on Friday, and amongst all the Mortal Kombats and Demon Slayers currently trying to lure pandemic-exhausted film lovers back, this is the best excuse yet for an experience that reminds us why we love going to the movies, and why we have missed it. Here Today is a triumph of the heart.

Producers are Fred Bernstein, Dominique Telson, Zweibel, Haddish and Crystal. Check out my video review with scenes from the film at the link above.

Do you plan to see Here Today? Let us know what you think.