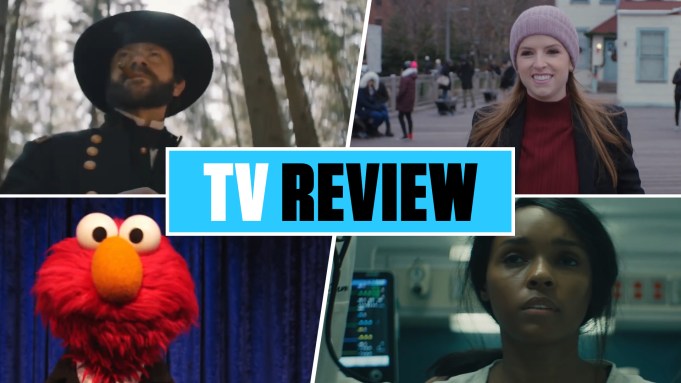 Perhaps more than recent past Memorial Day weekends, this year will be a more solemn occasion as a gradually reopening America continues to faces the threat of the coronavirus pandemic.

In what has traditionally been the kickoff to summer as well honoring those who gave the ultimate sacrifice for their country, this last Monday in May sees a small-screen landscape full of offerings – especially with the launch of the much-hyped HBO Max into the streaming wars.

Still, there can only be one new show that you have to watch this week. To find out what that is, you’ll have to take a gander at my video review above.

After a long absence, Friday sees the return of Amazon’s thriller Homecoming for a second season, now toplined by Janelle Monáe. Fitting for Memorial Day, History will kick off its three-night Grant miniseries May 25 with a spotlight on the great Civil War general and the USA’s 18th President. Launching with a thinner slate than intended due to production halts from COVID-19, HBO Max turns on the lights May 27 with the Anna Kendrick-starrer Love Life and Sesame Street spinoff The Not-Too-Late Show with Elmo.

First off, the timely Grant docuseries executive produced by Leonardo DiCaprio and Jennifer Davisson looks at the life and career of the military legend who saved the Union during the Civil War and tried to hold the nation to its higher angels during his two terms in the White House. Based on Ulysses S. Grant’s own memoirs and drawing from Ron Chernow’s 2018 bestselling bio, the May 25-27-airing Grant stars Everest alum Justin Salinger as the cigar-chomping man himself in reenactments. The Malcolm Venville-directed event series is also full of insights from the likes of Ta-Nehisi Coates, Gen. David Petraeus, Chernow himself and others.

Back 18 months after its first run led by Julia Roberts and Stephen James, Season 2 of Amazon’s Homecoming is both a sequel of sorts and a rebirth. The seven-episode psychological thriller helmed by Kyle Patrick Alvarez sees Golden Globe nominee James return with franchise newcomer and Moonlight star Monáe in search of her identity and the role of the powerful Geist Group in her circumstance. Watchmen vet Hong Chau is back, and Oscar winner Chris Cooper and Emmy winner Joan Cusack join the series co-showrun by Eli Horowitz and Micah Bloomberg.

A Muppet Show and more for the 21st century, The Not-So-Late Show with Elmo debuts with three episodes of the latest offering from “everyone’s favorite 3 1/2-year-old red monster,” to quote sidekick Cookie Monster.

After the HBO Max premiere day, a new Not-Too-Late Night Show will drop every Thursday for the next 10 weeks. On that ride, Elmo will be joined by many of his Sesame Street friends plus guests like Jimmy Fallon, the Jonas Brothers, a trike-racing John Mulaney, John Oliver, Lil Nas X and Blake Lively – and yes, the little guy is in a suit and behind a desk on the Sesame Workshop-produced show.

The first scripted show from HBO Max, Love Life finds Oscar nominee Kendrick as straight out of college Darby, looking to find love and herself in New York City. Created by Sam Boyd, the first season of the rom-com anthology centers on one relationship an episode in the search for Mr. Right over Mr. WTF. The first season of Love Life also stars Zoë Chao, Peter Vack, Sasha Compere and Lesley Manville.

Have a great Memorial Day weekend.