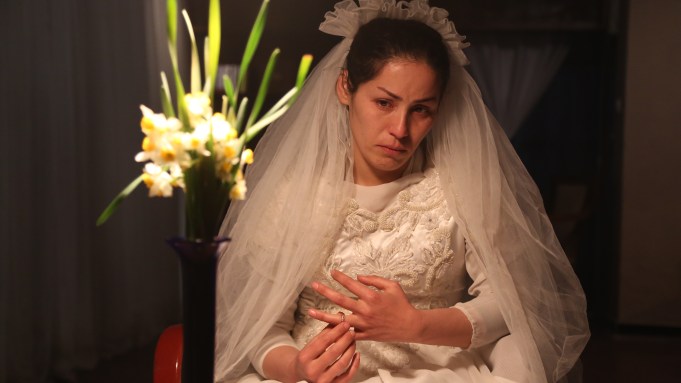 EXCLUSIVE: Sahraa Karimi’s debut feature Hava, Maryam, Ayesha is screening in the Horizons section here at the Venice Film Festival next week. This is the first independent Afghan movie entirely shot in Kabul with cast and crew living in Afghanistan. It tells the story of three women from different social backgrounds who are facing a big challenge in their lives. Check out the first trailer above.

The trio is representative of women “who haven’t had a voice for many years and are now ready to change their destiny,” says Karimi. In the film, Hava (Arezoo Ariapoor) is a traditional pregnant woman whom no one cares about, and is living with her father and mother-in-law. Her only joy is talking to the baby in her belly. Maryam (Fereshta Afshar), an educated TV news reporter, is about to get a divorce from her unfaithful husband, when she finds out she is pregnant. And Ayesha (Hasiba Ebrahimi) is an 18-year-old girl who agrees to marry her cousin because she is pregnant and the baby’s father has disappeared after hearing the news. Each of the women must solve her problem by herself for the first time.

Karimi, who has made more than 30 shorts and documentaries, has also stated that as a female filmmaker from Afghanistan, she promised herself “to be the storyteller of my fellow countrywomen who seek to change their lives in a traditional society. By traveling to many Afghan cities and villages, I found real stories from inside my country about such women as Hava, Maryam and Ayesha.”

The film is produced by Katayoon Shahabi and Karimi. World sales are with Shahabi/Noori Pictures.