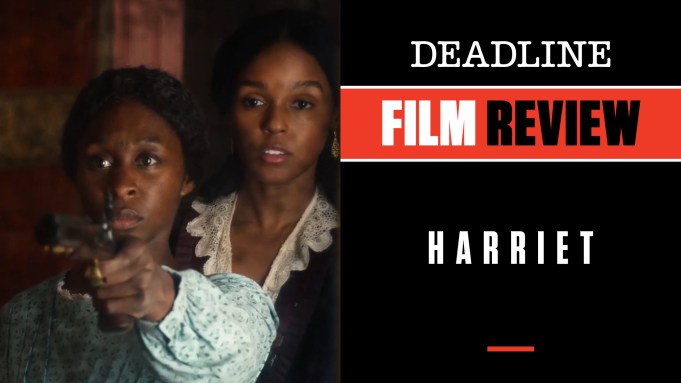 Harriet Tubman, the much admired African American abolitionist, Civil War spy, philanthropist and just about everything else she could pack into 91 years, died in 1913 just as the movie industry was in its infancy. Now more than a century later this true hero is finally, finally, getting her own motion picture. Even Harriet has been in development for the better part of a decade, with its star Cynthia Erivo attached for about three years before director Kasi Lemmons rolled the cameras.

Though the film sometimes feels a little bit like a standard-issue biopic, the story packs a punch, thanks in large part to a fearless and ferocious portrayal by Erivo, who in only her third major motion picture role, and first solo lead, nails it. She plays the slave known as Minty, who after her husband is freed wants to join him in that status and eventually escapes her owners and heads North. However, the act only empowers her to do the same for those left behind, leading her to enlist the Underground Railroad in a successful effort to free hundreds of other slaves, a heroic mission beyond compare as she changes her name to Harriet Tubman and a legend is born.

The bulk of this film sees her inviting danger at every turn as she keeps going back to the land from which she escaped and bringing many with her. It is exciting stuff, and Lemmons, working from a script she wrote with Gregory Allen Howard, has dramatized it as the extraordinary human story it is. There is actually too much to Tubman’s legacy and life to pack in one two-hour picture, and these filmmakers don’t try. It would probably be better suited to a miniseries, and one day it should be, but the slice of her life on view in Harriet is compelling and should please Tubman admirers, American history buffs and those who may not even be aware of who she was. They certainly will be aware of her historic achievements now, and for that we can be grateful.

Among the excellent supporting cast, standouts are Leslie Odom Jr. (Hamilton) as abolitionist William Still, who joins Harriet in her cause, as well as Janelle Monae who shines as Marie Buchanan, a proud woman who was born into freedom and eager to share the fruits of that with others — including Harriet, for whom she becomes a key ally. Playing the bad guy in all this is Joe Alwyn as Gideon, the slave owner who spends much of the film trying to bring Harriet back into the fold by tracking her down. Their key confrontation scene is one for the books and will have the audience cheering. Alwyn is very good in terms of making what could have been a one-dimensional role much more interesting.

Certainly in recent years we have had a large number of movies centered on slavery, most notably the Best Picture Oscar winner 12 Years a Slave, but as the filmmakers here correctly say this is defiantly not a “slave movie” but rather one about freedom. In that regard it stands very tall indeed, just like the woman it is named after and the performance of Erivo in that role. (Erivo also co-wrote the stirring end title song, “Stand Up,” which we will likely be hearing at the Oscars.) Kudos also to John Toll’s superb cinematography.

Producers are Debra Martin Chase, Daniela Taplin Lundberg, and Howard. Focus Features releases the film Friday. Check out my video review above with scenes from the film.

Do you plan to see Harriet? Let us know what you think.