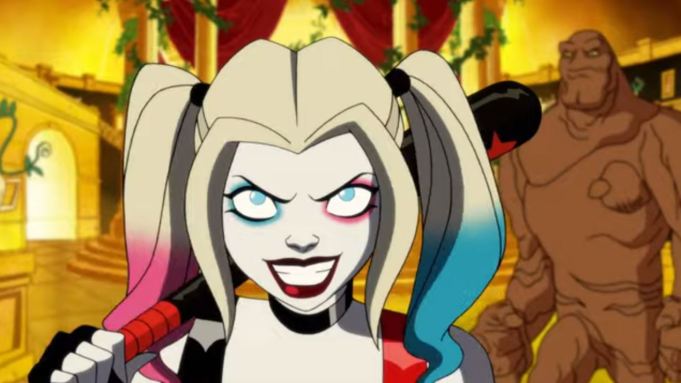 Gotham City is no Mickey Mouse town and the homicidal Harley Quinn will never be Disney princess material. The are two indirect takeaways from the just-released trailer for Harley Quinn, the animated original series that premieres Nov. 29 on the DC Universe subscription streaming service. The show is traditionally animated which suits the pin-up pixie qualities of Harley (who is, after all, a native of the medium, having made her first appearance in a 1992 episode of  Batman The Animated Series) but the is most assuredly not aimed at children, hence the trailer with F-bombs, compound fractures, a decapitation, and HPV gag..

The show has Kaley Cuoco of The Big Bang Theory voicing the title role and (much like Fox’s wildly popular Deadpool movies) it is drenched in irony, splattered in blood, and awash in obscenity, all in the name of mature entertainment with a defiantly immature sensibility.

The trailer is actually holding back, too. This year is the 80th anniversary of Batman, one of the most valuable and malleable IP brands in American popular culture, but the pilot episode of Harley Quinn is the first time the character has been portrayed in any Warner Bros/DC Comics adventure that includes “m*therf*cker” in its unbleeped dialogue. It’s not clear if that qualifies as progress but it does hint about the near future of the superhero entertainment marketplace.

The success of Joker (now the highest-grossing R-rated film in history) and the ramping interest in the R-rated February release of Birds of Prey (and the Fantabulous Emancipation of One Harley Quinn) with Margot Robbie will only give more momentum to edgier DC content. On the small screen, that trend is reflected in the bleak and violent Titans (which was just renewed for Season 3), the subversive  Doom Patrol and, soon, the dangerous but daft Harley Quinn.

For most of its history, DC Comics has been viewed (for right or wrong) as the staidest institution among comic book publishers. Marvel’s aura, meanwhile, was locked in during the 1960s when the upstart brand became known as the  cool, dynamic underdog. Now, with Marvel- and DC-based screen entertainment, the brands are separating themselves  in a different way.

The advent of Disney+(which will not stream any R-rated or M-rated content) and its reliance on Marvel Studios content will keep the Disney-owned Playa Vista superhero factory churning out PG-13 fare for years. It’s not clear how Fox’s  Deadpool series fits into the Disney-shaped family entertainment matrix but if things get too wholesome for the Merc with the Mouth maybe they can ship him off to Gotham City?