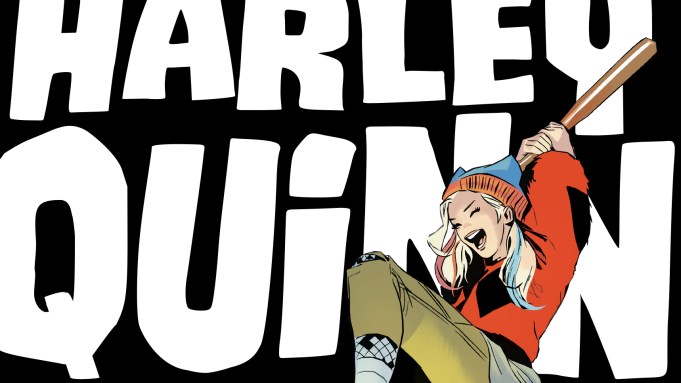 EXCLUSIVE: It’s no joke to call Harley Quinn the hottest character in the DC Universe these days with both a live-action feature film and her own animated television series on the way. The daft but deadly Gotham City rogue also gets the spotlight at end of this month when the new graphic novel Harley Quinn: Breaking Glass hits store shelves with a coming-of-age tale from the character’s wild-child youth.

This morning you can watch the Breaking Glass book trailer he

re and only here at Deadline. Written by Mariko Tamaki and illustrated by Steve Pugh, Breaking Glass is part of the DC Ink imprint which reframes popular characters in stories that are geared to provide an entry point into the DC mythology for YA audiences and female readers.

Official synopsis: “Harley Quinn: Breaking Glass is a coming-of-age story about choices, consequences, justice, fairness, and progress and how a weird kid from Gotham’s poorest part of town goes about defining her world for herself. From Eisner Award and Caldecott Honor-winning author Mariko Tamaki (This One Summer, Supergirl: Being Super). Harleen is a tough, outspoken, rebellious kid who lives in a ramshackle apartment above a karaoke cabaret owned by a drag queen named Mama. Ever since Harleen’s parents split, Mama has been her only family. When the cabaret becomes the next victim in the wave of gentrification that’s taking over the neighborhood, Harleen gets mad. When Harleen decides to turn her anger into action, she is faced with two choices: join Ivy, who’s campaigning to make the neighborhood a better place to live, or join The Joker, who plans to take down Gotham one corporation at a time.”