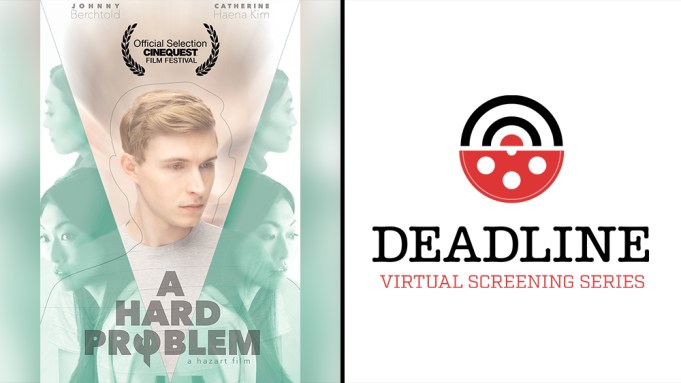 “I went into it thinking that this was going to be this family drama, which it is, but I didn’t understand the heighten structure of the world that was at play,” says Johnny Berchtold of A Hard Problem, the near future-set feature debut from directing team hazart.

As you can see in the video above, The Wilds actor joined hazart and castmate Catherine Haena Kim recently for a Deadline Virtual Screening Series panel.

Starting out with the death of a mother, the highly stylized A Hard Problem sets its focus on loss and grief and then takes its characters on a very contemporary and yet classical path of what is life, love and what is reality in a digital world. Certainly, the estranged relationship between the Berchtold portrayed Ian and his sister over their mother’s passing and a memorial service snub leads the young man to discover there is a lot more to his life than he ever suspected – hardwired and otherwise.

A Hard Problem made its virtual world premiere at Cinequest on March 20.

“The germ of this idea started as what happens if you gave religion to an android as a way of helping it to cope with being shut down,” notes hazart of the Ryland Aldrich and Adam Maffei produced indie film. “We also liked that it sort of spoke to the develop of technology and the ethics around that,” the filmmaker added of A Hard Problem, which hazart both penned and directed.

However you feel about that, check out a portion of my chat with the directors and key cast of A Hard Problem above.