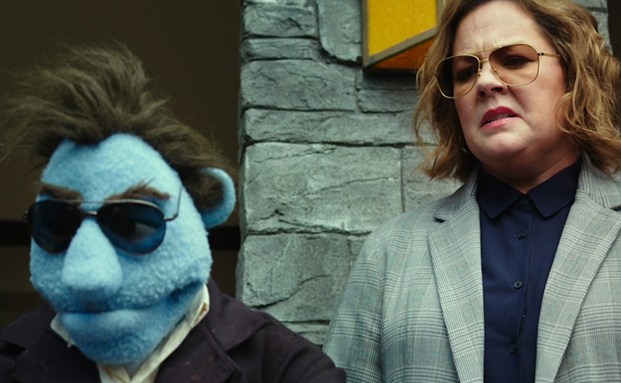 With echoes of Who Framed Roger Rabbit and Broadway’s Tony-winning puppet show Avenue Q, new Melissa McCarthy comedy The Happytime Murders blends some down-and-dirty puppetry with a Bogart-style murder mystery to dig deep for laughs in this sometimes quite funny late-summer trifle from the Muppet masters at the Jim Henson Company — or in this case what they call HA – Henson Alternative. And alternative it definitely is as the ads so succinctly state, “No Sesame, All Street.”

Working from basically a one-joke-premise script by Todd Berger, director Brian Henson (company founder Jim Henson’s son) delivers the movie the Muppet creators probably always have pined to make but couldn’t under the Muppet label. As I say in my video review (click above to watch), it’s a filthy, hard-R puppet romp starring their new felt up friends. Make no mistake: Thisdecidedly  is not a feature vehicle for Kermit or Miss Piggy but rather some new characters caught up in a murder mystery set in a modern Los Angeles where humans and puppets co-exist. Who Framed Roger Rabbit did this sort of thing better in the toon world — and much cleaner — but you get the idea when the language has no restrictions.

The plot revolves around disgraced P.I. Phil Phillips (voiced by Bill Barretta), who once was partnered with LAPD detective Connie Edwards (McCarthy) and through circumstance reteams with her when the cast of a ’90s sitcom, The Happytime Gang, is mysteriously knocked off one by one. Turns out the show was sold into syndication and the cast members stand to collect a cool $10 million in residuals. Someone wants them dead, and this mismatched pair human/puppet pair of crime veterans have to get to the bottom of it. Along the way they run into interference from an FBI agent (Joel McHale) and his team and numerous others who put obstacles in their way, including Jenny (Elizabeth Banks), who played the only human member of that TV show.

A visit to a puppet porn shop and an office sexual encounter with Phil that ends in ejaculating silly string are the comic highlights in a movie that has some very funny lines mixed with flat scenes that slow down the action in this zippy pic. Classic movie tropes are everywhere, including one scene aping Sharon Stone’s infamous revealing leg-cross moment in Basic Instinct, this time involving a seductive puppet. Hopefully that movie isn’t so long in the tooth as to prevent the very funny joke from landing. Dorien Davies voices the sex-obsessed redheaded puppet at the center of that scene in this deliciously dirty, noir-ish mystery.

STX Entertainment, which opens The Happytime Murders on Friday, offered the prospect of free concessions including booze at Monday’s Hollywood press screening in order to help ensure the laughs. It wasn’t necessary. A pro like McCarthy (who also produced with husband Ben Falcone, who’s seen in a brief cameo) knows exactly how to play this stuff and does a great job surrounded by the svelte felt machine engineered by Henson and his remarkable team of puppeteers. Among the humans, another standout is the always-hilarious Maya Rudolph as Bubbles, who is Phillips secretary.

The movie runs barely 90 minutes and seems padded at that, with a laboriously slow final-credits crawl that must have accounted for ten minutes on its own in order to help jack this limited premise up to feature length. Nevertheless, when it hits its marks, it does so with a sense of fun that fulfills the promise of the forgettable but undeniably amusing high jinks on screen.

Do you plan to see The Happytime Murders? Let us know what you think.