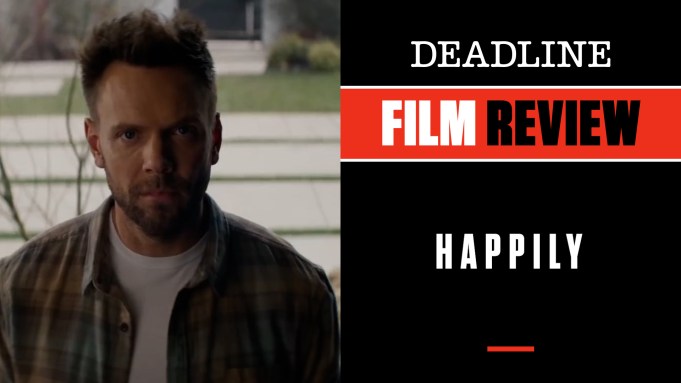 Debuting filmmaker BenDavid Grabinski is a self-proclaimed fan of rom-coms and The Twilight Zone. With his first feature he has managed to blend the two, even throwing in a bit of Billy Wilderesque black comedy to make a film that satirically puts marriage, long-term romance and the slippery slope of relationships on trial. Oh, and it gets really weird along the way.

Grabinski makes no secret of the fact that, first and foremost, he wanted to use an offbeat Twilight Zone-style concept including what he calls taking your protagonists and throwing them into a surrealistic morality tale. For much of Happily, especially the first half before he lets his clever conceit careen off the rails (he reels it back in for a delicious finish), he surprisingly hits his targets with the help of a superbly chosen ensemble who expertly navigate just the right beats of their disparate characters.

The set-up is hoot. We meet Tom (Joel McHale) and Janet (Kerry Bishé) who act and look like they are on their honeymoon, unable to keep their hands off each other, constantly having sex in whatever room or moving vehicle they happen to be in at the moment, and never ever arguing or disagreeing with each other. How nice. Tom even makes breakfast for her each morning.

But as we soon find out their adult couple friends, seemingly comfortable in their own marital non-bliss, completely resent them, tired of watching Tom and Janet go at their passion in such unabashed ways. The catch is that this is not a newly married couple, but one that has been betrothed to each other for 14 (!) years. Their friends state this just isn’t normal and wonder why this childless pair can be so overtly affectionate after all this time. It forces a chasm between them and the others who are arranging a weekend couples getaway at a lavish modern estate and pointedly are not inviting Tom and Janet.

Cut to a mysterious visitor named Goodman (Stephen Root, perfectly cast) who arrives with a briefcase containing two imposing syringes. Here is where the Twilight Zone-y stuff begins to appear as he apologizes for the mix-up, explaining that both Tom and Janet somehow did not get the right genes at birth and are essentially malfunctioning. A shot with a syringe for each is what he is there to give so they will revert to being just as miserable in marriage as their friends. He is even offering a check as part of the apology — apparently from a much higher power than is humanly known. This of course freaks this couple out, things accelerate quickly, and Janet impulsively beats the man to death with household props. Tom however forgives her and they frantically try to find ways to dispose of the body.

Was this all real, or, oh no, this must have been a prank pulled on them by their friends. When they show up uninvited at the weekend getaway and confront the friends with this theory and what happened, it is clear it was no prank. Things get heavy as Janet actually spots the dead-and-buried man in the liquor store and his portrait strangely turns up prominently in the house. What comes next?

Grabinski has managed up to this point to keep the comedy on a subtle satirical track, taking jabs at the sad trajectory of many relationships by putting Tom and Janet so effortlessly forward as the poster children for true lifelong romance. Stretching his Twilight Zone premise to over 90 minutes means it has to get really dark and foreboding as the story becomes a bit of a familiar thriller trope. Fear not as a showcase confess-all group therapy session becomes the highlight of the film and it manages to land on its feet before the credits roll (stay tuned to the end for one last scene). Making this work better than it had any right to is the well-chosen cast including the two leads, McHale and Bishé, exhibiting great chemistry and playing off each other nicely. As the various other friends nearly all of them get to shine, but Natalie Zea is really fun as an ex of Tom’s looking to rope him in to an affair right under Janet’s nose. Natalie Morales, Paul Scheer, Breckin Meyer, Jon Daly, Shannon Woodward, Charlyne Yi, Kirby Howell-Baptiste and Al Madrigal all share winsome moments as well.

Happily might have been more effective if it actually was the length of a half-hour Twilight Zone episode, but it is a whole lot of fun even with some flaws that keep it from true brilliance. Grabinski is certainly one to watch and I can’t wait to see what he does next. Actor Jack Black is one of the producers but somehow resisted putting himself in the film. The other producers are Spencer Berman, Nancy Leopardi, Ross Kohn and Grabinski. Saban Films puts it on digital and on-demand today.

Check out my video review above with scenes from the film. Do you plan to see Happily? Let us know what you think.