Continue to Deadline SKIP AD
You will be redirected back to your article in seconds
Skip to main content
August 21, 2021 1:31pm 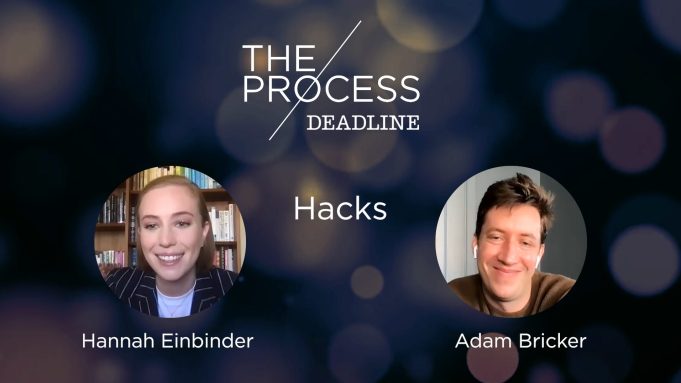 When cinematographer Adam Bricker boarded Hacks, he found a project that embraced the character-driven storytelling he loves, and one that would challenge him in new ways.

“It was one of the biggest shows that I’ve ever worked on, in terms of just the scale of the production,” he says. “With Hacks, from the get-go, it’s so filmic, and the visual storytelling is so rich, and I really wanted to carry that through to the scenes that are maybe less filmic on the page, or less obviously visually driven.”

While Einbinder had worked on a handful of film and TV projects prior to signing on, she too faced a learning curve on the series, given that her role in the show was her biggest yet. Prior to production, she’d picked up a copy of Oscar winner Michael Caine’s book, Acting In Film, as a primer on blocking and other aspects of acting for the screen. But when she arrived on set, she still had much to learn with regard to the “many moving parts” of the craft, including eyelines and the hitting of marks.

“It’s a lot of stuff to juggle in the old noggin,” she admits, noting at the same time that the series represented “the best possible environment [for learning] on planet Earth.”

Einbinder recently sat down with Bricker for a wide-ranging conversation as part of Deadline’s video series, The Process. In it, they trade notes with regard to their experiences on the series, as two up-and-coming artists. “I think that in some ways, there are parallels between being a young actress and a young cinematographer, in that the opportunities you’re given, you don’t really fully control it,” says Bricker. “You’ve got to make the best of what you got, and I think that I try to make these projects, whatever they are…my own.”

Of course, in the end, both artists did just that, watching as the show took their careers to new heights. With it, Einbinder secured her first Emmy nomination, as Bricker notched his second.

Einbinder says she fully experienced the power of Bricker’s work on Hacks when she attended an FYC event at the Rose Bowl, and was able to watch the series’ first two episodes unfold on the big screen. “Watching it on a laptop is like an insult to its quality, almost. Watching it on a huge screen, I was like, ‘Oh, I’m seeing it for the first time,’” she says. “Adam Bricker is stealthy and a humble genius. Your vibe on set is, you sort of just appear, and then things become beautiful, and you sort of just take your leave. It’s a beautiful thing to watch.”

During her conversation with Bricker on The Process, he breaks down his approach to telling the interconnected stories of Ava and Deborah through the camera, also touching on his favorite sequences from Season 1 (including its “magical” opening oner), the experiences that initially sparked his interest in cinematography, his first major career breakthrough with Netflix’s Chef’s Table and more. Einbinder elaborates, for her part, on working with Jean Smart, her theory that cameras should be blue, and Hacks’ “glorious reception, among other topics.

Check out the full conversation between the Emmy-nominated creatives above.